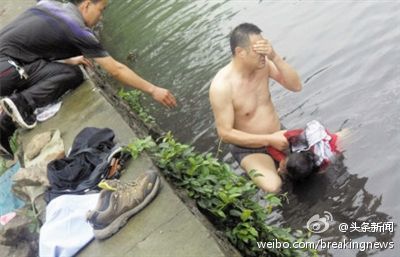 Zhang Guangcong, a policeman, grasps his eyes as he pulls a fourteen-year-old girl from the stinking river water. Zhang was hospitalized, vomiting and dizzy, the day after jumping into the severely polluted river. (Weibo.com)
China

After Rescuing Girl From Polluted River, Chinese Policeman Gets Sick

A police officer ended up ill in hospital after jumping into a filthy river in Zhejiang Province to rescue a 14-year-old girl trying to commit suicide.

Zhang Guangcong, 51, dived beneath the severely polluted water three times to reach the teenager, who had sunk below the surface of the river in Wenzhou City.

He told the Metro Express that the water was so dirty he kept his eyes closed the whole time, and relied on instinct to find her.

A few hours later, Zhang began to cough and vomit, and went to the hospital the next day with other symptoms like dizziness, and skin irritation. He was diagnosed with a severe lung infection, probably caused by bacteria from the dirty water.

According to the Express, that part of the river is black with pollution, and has a terrible stench. The banks are covered in rotten food and other domestic waste, and there are rats running around during the day.

An elderly local called Mr. Lin told the media that he used to wash his clothes in the river, but now no one dares go near the water. He added: “A badge factory discharges its electroplating waste directly into the river; they were sued by residents over 10 years ago, but they kept on doing it anyway.”

Internet users praised Zhang’s heroism, and some said the Environmental Protection Bureau should make a “formal apology,” after the local chief failed to visit Zhang in hospital.

A netizen remarked on Tianya, a popular online forum: “The Environmental Protection Bureau is powerless on certain issues, as higher authorities are only interested in economic development. How could the bureau go against the will of their higher-ups? It is just like a deaf person’s ear, if not already an accomplice.”

In February, a wealthy blogger in Zhejiang Province offered the head of Ruian City’s EPB 200,000 yuan ($32,000) to swim in a contaminated river for at least 20 minutes, after he had denied water quality problems. The official refused the offer, saying his bureau was “not responsible” for the pollution.

With research by Tan Hohwa