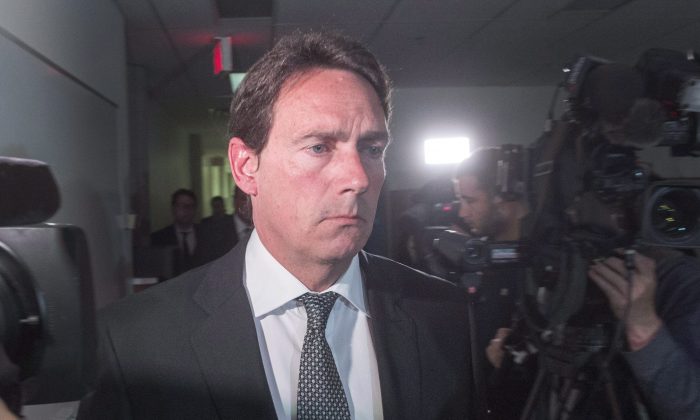 Pierre Karl Peladeau arrives to announce his surprise resignation as leader of the Parti Quebecois at a news conference on May 2 in Montreal. (The Canadian Press/Ryan Remiorz)
Canada

After Quitting Politics, Will Peladeau Return to Media Giant Quebecor?

MONTREAL—While speculation is already swirling about whether Pierre Karl Peladeau will return to head Quebecor Inc. after his stunning political resignation, his commitment to the company he inherited from his father has always been clear.

Peladeau steadfastly refused to sell his controlling shares in Quebecor while leader of the Parti Quebecois, despite constant haranguing by his political opponents on the alleged conflict of interest.

One man who believes Peladeau, 54, will return to the day-to-day activities of running the conglomerate is Michel Nadeau, a former executive with Quebec’s pension fund manager who helped engineer the Quebecor-Caisse de depot acquisition of the Videotron cable company in 2000.

“I have no doubt Peladeau will return to Quebecor,” Nadeau said Tuesday. “It’s what he knows, it’s where he is comfortable. The company now needs a new vision, however. Cable is over.”

Peladeau announced April 2 he was quitting politics and his dream to make Quebec a country in order to spend more time with his children, who are caught in the middle of divorce mediation proceedings between himself and his estranged wife, actress and producer Julie Snyder.

“Politics is a seven-day-a-week job—you don’t stop,” said Nadeau. “Now he’ll be able to be home around 6 or 7 p.m. every night. As an owner of a company you get to delegate.”

Peladeau, who stepped down as Quebecor chairman in 2013 and ran for the PQ in the 2014 election, made no reference to his future plans during his tearful news conference.

Quebecor owns 81.07 percent of its subsidiaries, while the Caisse owns the rest. Revenues in the telecommunications sector topped $3 billion in 2015, compared with roughly $965 million in the media branch.

Half of the telecommunications revenues came from cable telephone and TV clients.

Nadeau said customers are quickly moving away from cable, “and this is going to be a major hurdle for cable companies such as Videotron.”

Peladeau, during his time as president and CEO, was key to transforming Quebecor from a print-based global firm his father launched to a digital communications giant, albeit with a much smaller footprint.

He sold off the troubled international printing subsidiary soon after it filed for bankruptcy protection in 2008.

Peladeau then reoriented the company toward focusing on promoting homemade news and entertainment content across its many platforms and on supporting Videotron’s entry into the wireless cellphone market.

Analyst Maher Yaghi of Desjardins Securities said Quebecor is still projected to have several more years of market share growth in Quebec’s wireless industry, compared to competitors outside the province that are operating in their saturated markets.

“When you look at wireless, they (Quebecor) are around 15 percent market share,” Yaghi said. “So we think it can get to 20-plus over time.

“Also, their customer base is young and so you have revenue-per-customer market share gain potential and the two are enough to help the whole company continue to grow over the next three or four years.”

Nadeau said Quebecor and Peladeau must decide if the company is interested in regaining its international footprint and moving beyond its Quebec-centric operations.

“Growth in the Quebec market is very limited,” he said.

The company has had very few operations outside Quebec since it closed the sale of its English-language newspaper assets in 2015.