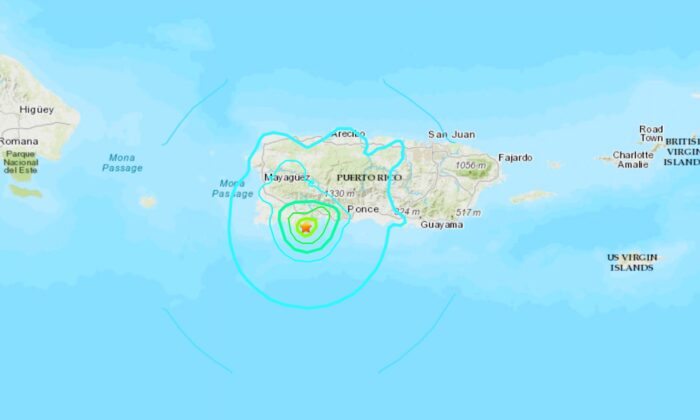 A map showing the location of the Jan. 10 earthquake just off the coast of Puerto Rico. (USGS)
US News

Senate Minority Leader Chuck Schumer (D-N.Y.) and 33 other Democrats sent a letter to the White House calling on President Donald Trump to approve full aid to Puerto Rico in the wake of several powerful earthquakes.

“With profound, widespread damage from the earthquakes in Puerto Rico, it’s past time to act. I’m leading Senate Democrats to demand that President Trump approve Puerto Rico’s request for FULL aid from the federal government,” Schumer wrote on Twitter.

Last week, a 6.4 magnitude tremor struck the island commonwealth and rendered thousands of people homeless and without power. That quake followed hundreds of quakes that had struck Puerto Rico since late December, and the U.S. Geological Survey (USGS) warned that more were sure to come.

“Eight landslides had been recorded, over 2,000 individuals were in shelters including 125 minors, and the island’s communications grid was only 75 percent operational. Many schools have been closed indefinitely and will only be reopened upon inspection,” Schumer’s letter said, noting that one death was reported.

Over the weekend, a 5.9 magnitude aftershock rocked the island. Over the next week, the USGS predicted, there’s only a 3 percent chance of an aftershock of a magnitude 6.4 taking place in the area.

“There is no substantive reason to withhold this congressionally mandated disaster aid for our fellow Americans on the island, and indeed failure to disburse these funds has a damaging material impact on Puerto Rico and its residents. The bottom line is that this money must be made available to Puerto Rico now,” Schumer’s letter said.

Trump “ordered federal assistance to supplement Commonwealth and local response efforts due to the emergency conditions resulting from earthquakes beginning” on Dec. 28, the White House wrote.

That declaration from Trump “authorizes the Department of Homeland Security [and the] Federal Emergency Management Agency (FEMA) to coordinate all disaster relief efforts which have the purpose of alleviating the hardship and suffering caused by the emergency on the local population, and to provide appropriate assistance for required emergency measures,” the White House said.

Puerto Rico Gov. Wanda Vazquez last week signed an emergency declaration to give the Puerto Rican government flexibility to respond quickly to the earthquake, she said on Tuesday during a press conference, according to CNN. The FEMA disaster agency later confirmed it received it and confirmed it “working closely with Puerto Rico Emergency Management Bureau” before two teams were deployed to the island.