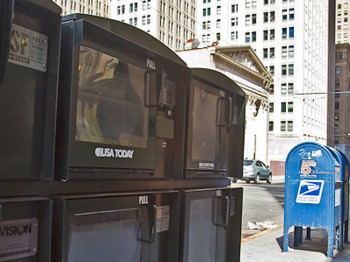 A montage of photos of four empty Epoch Times newspaper boxes in the Financial District in San Francisco, taken on Aug. 22, 2011. (Jan Jekielek/The Epoch Times)
US

In an odd coincidence of events, after The Epoch Times published an article about alleged collusion and corruption between Rose Pak and Ed Lee, hundreds of newspapers carrying the report vanished from boxes around the city.

The report, titled San Francisco Mayor’s Race Deeply Corrupted, Says Former Legislator, appeared above the fold on the front page in the local edition of the paper, on Thursday, Aug. 18.

Based primarily on an interview with former president of the Board of Supervisors Aaron Peskin, the article claimed that Pak, said to be Chinatown’s political boss, is attempting to keep Ed Lee in office in order to maintain her influence over city politics.

Quoting Peskin, the report also alleged that Pak has ties to the Chinese regime, and is promoting the interests of that foreign government in San Francisco.

The Epoch Times prints weekly in San Francisco, and the papers were placed in the boxes on Thursday morning before 7 a.m.

But mysteriously, between 9:15 p.m. on Friday evening and 6:40 a.m. on Saturday morning, hundreds of newspapers from over a dozen Epoch Times boxes simply disappeared.

Cornelia Ritter, while assisting The Epoch Times circulation manager in San Francisco, was checking 34 boxes in the Financial District morning and evening to monitor pick-up rates.

But by Saturday morning, when she next checked, 19 of those 34 boxes were completely emptied, some with only the display copy remaining.

“Based on past surveys, it is highly unlikely that there was a sudden rush on the papers between 9:15 p.m. Friday and 6:40 a.m. Saturday,” Ritter said in a telephone interview.

According to California Penal Code section 490.7, it is illegal to take more than 25 copies of a free newspaper in order to “deprive others of the opportunity to read or enjoy the newspaper.” See: http://law.onecle.com/california/penal/490.7.html

Steve Ispas, local publisher of The Epoch Times, acknowledged that there is a high-demand for the newspaper’s journalism in San Francisco. “The Epoch Times is very well received by the public,” he said in an interview. “Peskin’s testimony is a bombshell, alleging Pak’s influence over Ed Lee, and her connections to the communist regime in China. Naturally people are going to want to read that.”

But really—is the demand that high?

“It’s mysterious, isn’t it?” he mused. “Could hundreds of people all have taken a paper between late Friday evening and early Saturday morning? That would be a first.”

“And it happened right after the Pak coverage,” Ispas continued.

He wouldn’t speculate as to whether the papers disappeared as part of a politically-motivated theft, and to stop the story about Rose Pak’s influence over San Francisco politics and her connections to the communist regime in China from getting out.

He did have a police report filed though, just in case. “Either way,” Ispas said, “our reporting must have been rather effective.”