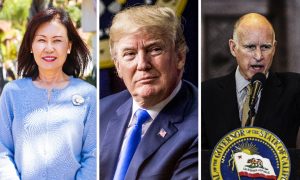 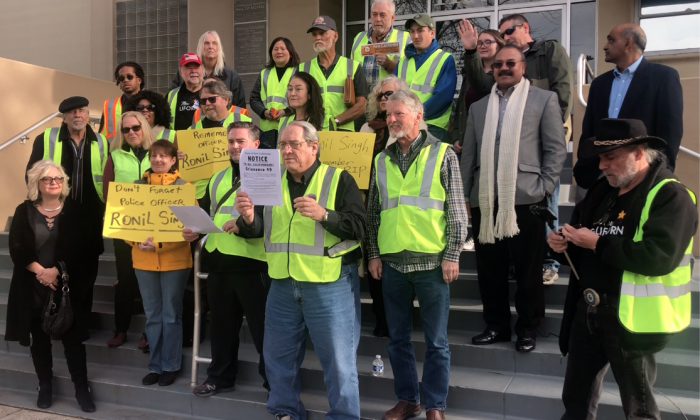 The gathering was held following the death of Newman city police officer Corporal Ronil Singh, who was shot by an illegal immigrant the day after Christmas during a traffic stop.

The New California movement is a statewide grassroots effort to break most of California’s rural areas away from the current state, and to form a new state. So far, representatives of 47 out of the total 58 counties in California have joined this movement, as well as fractions of five other counties.

The activists of the movement have been wearing yellow vests since December “in solidarity with French citizens” against socialism and globalism.

“Mass lawlessness is now the order of the day,” reads Grievance 49 issued by the New California movement at the Newman event, addressing Singh’s death.

The New California movement has been filing weekly grievances to establish how California citizens’ rights have been taken away by the current state government, following the same constitutional process under which West Virginia separated from Virginia in 1861.

“I really believe that SB 54 sanctuary state status has been one of the reasons why we have lost so many of our own American citizens,” said Paul Preston, the founder of the movement.

SB 54, which was signed into law by former Gov. Jerry Brown in October 2017, limits cooperation between local law-enforcement agencies and federal immigration authorities.

Many residents living in Newman City believe that SB 54 is responsible for Singh’s death.

Arriaga has two prior DUI arrests and ties to the Sureño Street Gang.

“This [the death of Singh] is probably something that could be prevented, had not we had sanctuary state. The suspected person, in this case, was arrested prior. If they were able to provide Homeland Security and ICE with that information, he may have been deported, and we might not be standing here today,” Newman Police Chief Randy Richardson said at Singh’s funeral service on Jan. 4.

“Illegal immigrants are dangerous,” said Pritpal Sinhm Gosain, who is a Sikh immigrant and resident of the nearby city of Patterson. Gosain came to join the yellow vests gathering because he shares a similar cultural background with Singh.

“We are here to honor our officer, Corporal Singh, who was murdered by an illegal immigrant,” said Paul Taylor, one of the top leaders of the New California movement. Taylor said that he joined a protest against SB 54 last March.

The grievance issued by the New California movement claims that California has been in violation of U.S. Constitution Article IV, Section 4, which is known as the “Guarantee Clause.” This section in the U.S. Constitution requires that the state and federal governments must provide the citizens of the United States a republican form of government, protect them against invasion, and protect them against domestic violence.

The grievance claims that the sanctuary state policy made by the current “mono-party” system in California has failed to provide Californians with what was required by the “Guarantee Clause” of the Constitution.

The movement calls the sanctuary policies designed by the current state’s “mono-party” system “acts of insurrection against the U.S. Constitution.”

Under California’s sanctuary state policy, “we are going to see Singh’s case happen over, over, and over again,” Preston said at Singh’s funeral service.

The grievance also states that the current California state is “attempting to destroy the State of California and break down the sovereignty of the Union of States of America” by utilizing Marxist-Leninist and Maoist revolutionary tactics.

The movement urges Trump to take proper actions, based on the Insurrection Act of 1807, to stop sanctuary state policies in California.

Preston told The Epoch Times that so far, there are similar movements in Nevada, New York, and Illinois.