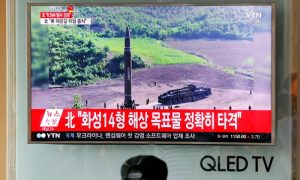 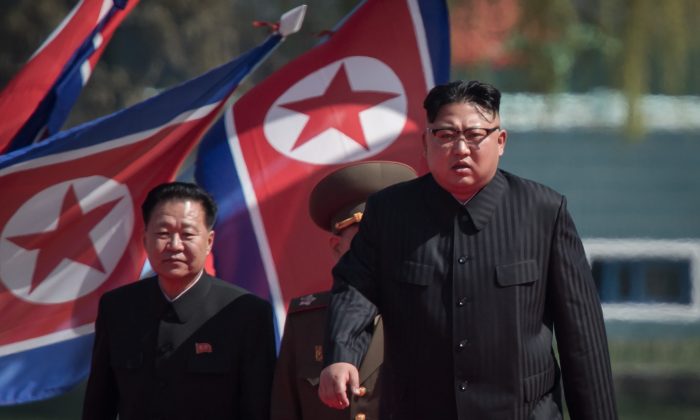 After North Korea Backs Off Threats, Trump Says It Made Right Decision

The leader of the North Korean communist regime, Kim Jong-Un, backed down from his missile threat against Guam on Aug. 15.

President Donald Trump responded the following day, stating on Twitter, “Kim Jong Un of North Korea made a very wise and well reasoned decision. The alternative would have been both catastrophic and unacceptable!”

Kim Jong Un of North Korea made a very wise and well reasoned decision. The alternative would have been both catastrophic and unacceptable!

The state-run North Korean news outlet KCNA reported on Aug. 15 that Kim decided to not follow through with his announced plans to launch missile attacks on Guam. It said he would “watch a little longer.”

The announcement brings a possible end to a series of recent threats from the North Korean regime, which began in January after North Korea claimed it was in the final stages of developing nuclear weapons capable of reaching the United States.

Trump did not give ground, however, and shot back on Aug. 9, stating “North Korea best not make any more threats to the United States. They will be met with fire and fury, like the world has never seen. He has been very threatening, beyond a normal statement. And as I said, they will be met with fire, fury—and frankly, power—the likes of which this world has never seen before.”

Close to a week later on Aug. 15, North Korea ended its current threat on Guam.

Eddie Baza Calvo, governor of Guam, posted an Aug. 14 video on Facebook of himself receiving a call from Trump, and stated “I have never felt more safe or so confident, with you at the helm.”

In addition to not backing down from North Korea’s threats, Trump also put pressure on Kim through his meetings with Chinese leader Xi Jinping, who now appears to be ending China’s long-standing defense and support for North Korea.

China announced on Aug. 14 that it will begin cutting off many of its economic support mechanisms for North Korea. It also voted for approved sanctions on North Korea at the United Nations, and is now looking to comply with those sanctions by restricting imports from North Korea of coal, iron, iron ore, and other items.

Trump is also putting additional pressure on China, which some analysts believe has likewise affected its position on North Korea. On Aug. 14, Trump signed an executive action that targets China’s trade policies, and according to Fox News aims to “safeguard copyrights, patents, trademarks, trade secrets and other intellectual property.”

The Korean Herald reported that the executive order was “seen as an effort to pressure China to rein in North Korea’s nuclear program,” and noted in its analysis that China’s ban on select North Korean imports went into affect the following day on Aug. 15.