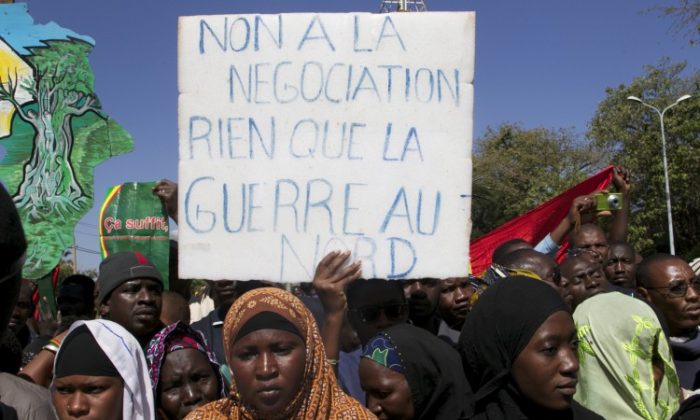 A man holds a banner that reads 'No to negotiation, only war in the north' as thousands of Malians gather in Mali's capital, Bamako, on Dec. 8, 2012. Malians are divided—some call for foreign military intervention to reclaim the north, controlled for eight months by Islamist armed groups, while some fear intervention could bring a new bout of tension and a new humanitarian crisis. (HABIBOU KOUYATE/AFP/Getty Images)
Africa

As jihadist groups in northern Mali terrorize the population and increase instability in the once-peaceful nation, Malians debate the advantages and disadvantages of using foreign military intervention to regain control of the north.

Until this spring, Mali had been a notable example of African democracy. A coup in March, however, ruptured the stable leadership structure.

Islamist terrorist groups took the opportunity to invade the north, imposing their version of Sharia (Islamic law). Separatists from the Tuareg ethnic group also took advantage of the government’s instability to fight for autonomy.

Mali is one of the 15 nations in the Economic Community Of West African States (ECOWAS). ECOWAS is ready to support its member state with military aid, as are European forces.

The United Nations and the United States decried the arrest, pressing Mali for a fast decision on intervention. The arrest took place at the order of former coup leader Captain Amadou Sanogo, who opposes foreign military intervention in the north. Sanogo wants to use only Malian forces, but some analysts say the Malian military does not have the capacity to succeed on its own.

“We expect the new authorities to agree rapidly on a roadmap and commit themselves to a short transition leading to elections and the return of the state in the north,” said a European Union official. “We also hope that credible negotiations with groups rejecting terrorism and recognizing the unity of Mali will move forward rapidly.”

Some EU officials have said the adoption of a roadmap would show Islamists that the government and main stakeholders have consensus—a strong, unified front.

Assistant Professor of Transnational Threats and Counter-Terrorism for the Africa Center for Strategic Studies Benjamin P. Nickels says the political divisions in Mali’s capital show “fragility and disarray.” Extremists in the north are likely to use the opportunity to make further advances.

“Diarra has been replaced by Cissoko, but the latter will need to work to establish some form of traction independent from the military faction that brought him to power, if he is to be effective,” wrote Nickels in an email.

Diplomatic negotiations have taken place with non-jihadist groups while Mali hesitates to use military intervention.

Earlier this month, representatives of the Malian government met with Islamist group Ansar al-Din and Tuareg group National Movement for the Liberation of Azawad (MNLA). A ceasefire statement released jointly by the two groups and the government said that all parties agreed to “respect national unity and the territorial integrity of Mali”, and “reject any form of extremism and terrorism.”

The negotiations excluded al-Qaeda in the Islamic Maghreb (AQIM) and the Movement for Tawhid and Jihad in West Africa (MUJAO), the main targets of the military intervention.

Guns at the Ready

ECOWAS and the EU still encourage having military might at the ready to address the significant threat should negotiations fail to progress.

“While dialogue remains the preferred of the two options being deployed by the region to resolve the problem, there is increasing evidence that some of the elements involved in the crisis are not amenable to dialogue,” said Salamatu Hussaini Suleiman, ECOWAS Commissioner for Political Affairs, Peace and Security, in a statement.

Suleiman warned it is “dangerous” to rely on dialogue as the sole strategy.

ECOWAS plans to deploy 3,000 soldiers in Mali, with an initial mandate of 15 months, and 200 instructors provided by the EU. It awaits the go-ahead from the U.N. Security Council and Mali’s government to move in.

According to Jon Temin, director of United States Institute of Peace’s Sudan and South Sudan program, the uncertainty in Mali’s capital, Bamako, will raise more questions about plans to confront extremist groups in the north.

The tensions must be resolved in an inclusive way, said Temin.

“In order for Mali to overcome its recent instability and thrive in the long-term, it has to address the grievances that motivate rebellions in the north and Malians’ frustrations with their political leadership,” wrote Temin in an email.

Malian scholar Mohomodou Houssouba said his compatriots are “puzzled” about the mission of the ECOWAS forces.

“Malian people are thoroughly divided, also because its leadership is quite divided. That’s the core issue in this latest bump,” wrote Houssouba in an email. “I must confess my own fear of open-ended foreign military intervention in northern Mali.”

“There seems to be a constant erosion of support for direct involvement on the ground … even in the north where people are desperate to get help. They used to pray for a rapid intervention. Now they are quite disillusioned or more realistic about the outcome.”

According to Houssouba, Malians do not believe that such a force is effective enough to deal a decisive blow to the different armed groups. But many support a swift action to liberate cities like Gao, Timbuktu, and Kidal, where an isolation of armed groups could help the humanitarian situation.

Houssouba said many Malians are also afraid intervention would open Mali up to foreign occupation for an undetermined period.

He envisions “an insufficiently trained force finding itself in a tough fight without clear objectives, unable to hold and build on territory it has cleared, stuck in an operation that drags on and brings civilian costs, and that slowly attracts the ire of Malian citizens.”

First, the Malian army could invade the north without waiting for U.N.-sanctioned ECOWAS support and successfully rout the Jihadists and Tuareg forces—unlikely, given the Malian army’s limited capacity.

Second, Mali could use its own forces with some minimal foreign help and try to take Gurma and Timbuktu. This would likely lead to a stalemate, however, said Swift.

Third, the Malian army might embark on its own campaign in the north, meet with decisive defeat, and need to be rescued by international forces.

“The third option is possible, but unlikely, although that is the direction events are moving,” said Swift. “International supporters will try to talk Mali out of this, but may fail.”

And fourth, Mali could wait for full international backing, train its troops and set up a well-planned international operation to reclaim the north.

“Scenario four is the most desirable, but seems unlikely as long as Captain Amadou Sanogo and the southern nationalists are in power,” said Swift.

His conclusion was grim: “All four scenarios lead to a massive humanitarian crisis.”

Refugees International estimates that between 360,000 and 630,000 may flee their homes if the situation deteriorates. U.N.-affiliated news source IRIN news reports that, as of the beginning of December, 353,745 Malians were displaced due to a combination of the conflict and a severe drought that struck the Sahel region.