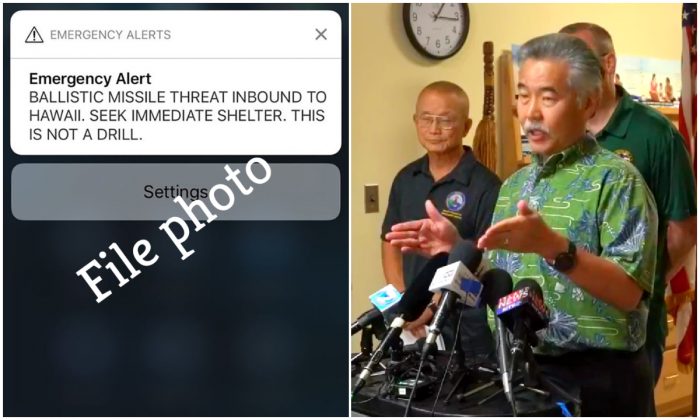 Hawaiians haven’t taken kindly to their local government after it terrified them with an imminent missile attack warning on the morning of Saturday, Jan. 13, only to call it off 38 minutes later. Now the government is trying to convince Hawaiians they can trust it if it cries “missile threat” again.

“I know first-hand how today’s false alarm affected all of us here in Hawaii, and I am sorry for the pain and confusion it caused. I, too, am extremely upset about this and am doing everything I can do to immediately improve our emergency management systems, procedures, and staffing,” said Hawaii Gov. David Ige in a Saturday statement.

The alarm was issued at 8:07 a.m. local time via a message to all Hawaiian cell phones that read: “Missile threat inbound to Hawaii. Seek immediate shelter. This is not a drill.”

An employee triggered the message by pushing “the wrong button” during a routine check of the Hawaii Warning System that was performed when a new shift was taking over the 24/7 State Warning Point, said Vern Miyagi, administrator of the Hawaii Emergency Management Agency, during a Saturday press conference.

The employee, 10-year veteran of the agency, has since been reassigned, Hawaii News Now reported.

For safety reasons, the employee’s name hasn’t been released. The agency itself has been harshly criticised by the public and even reportedly received death threats.

Ige and Miyagi stressed the agency made changes to procedures to prevent a false alarm in the future, including a rule that two people need to be present during the routine checks of the Warning System. The system’s app will also be modified to include a function to automatically send out a false alarm notification. This time the false alarm notification had to be prepared manually, which caused part of the delay, Miyagi said. Employees “will be counseled and drilled” too, he said.

Miyagi asked the public to take government emergency alerts seriously in the future, but acknowledged his agency’s credibility has taken a hit.

“The consequence of this is obviously bad. I’m working on credibility now because we worked so hard to get this [Warning System] in place,” he said.

The official description of events still leaves some unanswered questions, however.

Miyagi said the State Warning Point alert system is managed through a computer application and there are three to four people manning it. The shift changes every eight hours, and at unspecified unscheduled intervals, the employees perform a routine check of the system.

Miyagi said that as a part of the check, an employee is supposed to click on a button on the Warning System screen used to test the system, and then confirm it. The employee supposedly pushed a button that starts the actual warning and then confirmed it.

“There is a screen that says, ‘are you sure you want to do this?’” Miyagi said. “That thing was pushed anyway.”

Miyagi didn’t say why the employee did it. “I can’t explain that,” he said.

There’s another part to the story that seems not to fit the official explanation: Some of the sirens on the islands went off.

The sirens are a separate system from the cell phone alert messages and are triggered by a different person, Miyagi said. “Those two people are sitting side by side,” he said.

He didn’t explain how were the sirens were triggered. “We have to review that,” he said.

Ige also didn’t say who triggered the sirens. “We don’t know,” he said.

“It was not initiated up here in the office,” another official at the press conference said.

Most of the sirens that went off were within the proximity of military bases, one of the reporters at the press conference said.

Ige said the government is investigating how the sirens were triggered.