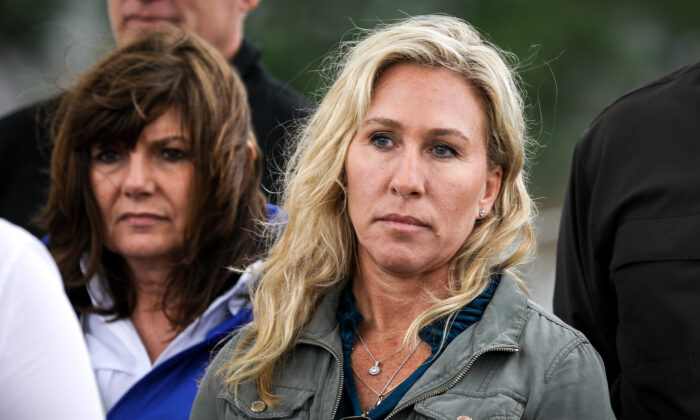 Greene said when Republicans take back control of the U.S. House, they will hold President Joe Biden and Democrats accountable for actions that breach national security and get to the truth about Jan. 6 with a legitimate committee.

One threat to national security Greene is referring to is the fact that the Biden administration allowed the sale of millions of gallons of oil from the Strategic Petroleum Reserve to foreign countries, including China.

“Of course, I believe Biden should be impeached for many reasons, but I do believe that’s an impeachable offense,” Greene said during a recent interview with Epoch TV’s Crossroads program.

More than 125 million barrels of oil from the Strategic Petroleum Reserve, a U.S. government facility that holds oil in caverns in Texas and Louisiana, have been sold across four sales, according to the White House on July 26.

Biden in March authorized the release of 180 million barrels of crude oil from the reserve to be sold at 1 million barrels per day part of his administration’s efforts to combat soaring gas prices.

“But when President Biden and his administration allowed all these barrels, millions of barrels of oil to be sold to countries like China and other countries, they really are attacking our national security,” added Greene.

Greene said part of the oil sold to the CCP was bought by a company that Joe Biden’s son Hunter Biden has links to and therefore threatens national security.

“It’s an abuse of power by the President of the United States, and his son, Hunter Biden is making money off of that,” Greene alleges.

The Epoch Times contacted the White House for comment.

Republicans have repeatedly called for an investigation into Hunter Biden’s business dealings in China and Ukraine and have vowed that if they take control of the House after November’s midterm elections they will conduct a thorough investigation into his dealings during the time Joe Biden was vice president.

Republicans have also said they will establish a legitimate Jan. 6 committee to find out what really happened during the breach and why the Capitol was not fortified despite the available intelligence that suggested there may be trouble that day.

“I really look forward to Republicans taking back the House, so that we can do our own investigation [regarding] January 6,” she said.

Greene called the Democrats’ Jan. 6 committee, a “fake” committee, because instead of following the facts, the panel is pushing an anti-Trump narrative.

“I was interested in the committee at one time because I feel like yeah, we do need to know what happened on January 6, but as you can see, it is a completely one-sided witch hunt, where they are creating their own story.”

She said House Minority Leader Kevin McCarthy (R-Calif.) was not permitted to make his own selection for the Jan. 6 committee but that Pelosi assigned two so-called Republicans that would go along with the Democrats’ agenda.

Greene claims that the committee was told by the Jan. 6 committee chairman that House Speaker Nancy Pelosi (D-Calif.) is “off limits” and cannot be investigated or questioned regarding the breach in the Capitol.

“Nancy Pelosi is directly responsible for refusing to have the National Guard at the Capitol on January 6, like President Trump and others had requested based on Intel reports they had,” she added.

The Epoch Times reached out to Pelosi’s office for comment about security on Jan. 6.

One of the members of the Jan. 6 committee, Rep. Liz Cheney (R-Wyo.) told Fox News that Trump “never issued any order to deploy the National Guard to protect the Capitol.”

According to former Pentagon chief of staff Kash Patel, Trump authorized up to 20,000 National Guard troops for use in Washington or elsewhere on Jan. 6, 2021, but the use of those troops was later rejected by Washington Mayor Muriel Bowser and the U.S. Capitol Police.

“Under the law, [and Cheney knows this] the president can’t order the deployment of the military for use inside the United States, Patel said. The offer of troops was rejected by Bowser and House Speaker Nancy Pelosi (D-Calif.),” he said.

The Epoch Times reached out to Bowser’s office for comment.

Greene said people including, Pelosi and Bowser, and those who could have ordered the deployment of the national guard that day should be investigated for why they did not move forward after Trump’s authorization of the troops.

The current Jan. 6 committee is a “scam” said Greene.

“And they’re wasting the American people’s taxpayer dollars. And the news is going right along with it, filling up the airwaves with their ridiculous lies. And that’s what they have to do, you want to know why they hate President Trump more than anyone on planet Earth.”

Greene believes the motivation behind the Jan. 6 committee is to further malign Trump.

“They want to make President Trump as toxic as possible, because they know he’s running again for president and they want to hurt him as much as they can,” said Greene. “President Trump did nothing wrong, none of us did. All we did was plan to object [to the electoral votes in the 2020 presidential election] just like the Democrats did to Republicans that were elected as president [in 2016].”

Zachary Stieber and Joseph Hanneman contributed to this report.