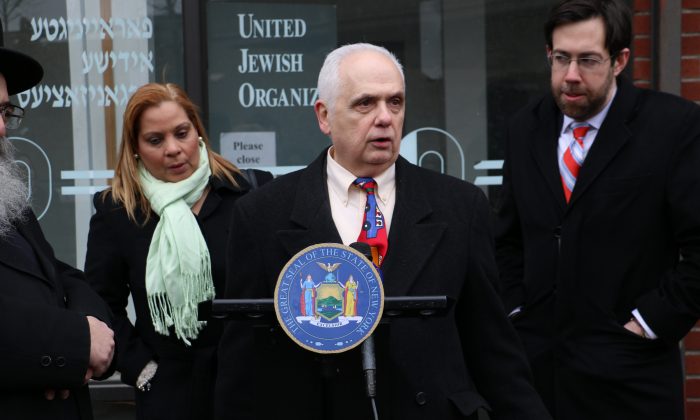 After Menachem Stark Case, a Bill to Expedite Body Identification

NEW YORK—State Assembly member Joseph Lentol introduced a bill that would expedite the process of identifying bodies by mandating that all police precincts be notified about bodies found in other precincts.

The bill would require the Division of Criminal Justice Services to tell all of the local precincts that a body has been found.

In January, a man from Brooklyn was suffocated, set on fire, and thrown in a dumpster in Great Neck, Long Island. It took about 12 hours for police to identify the body because there was no reported missing person in that precinct of the same description. The body was eventually identified as that of Menachem Stark, a real estate developer from Brooklyn.

“This was a very high-profile case. Not all the cases are going to be like that where it is high-profile, and the body will just languish in the morgue without ever being identified,” said Lentol at a press conference on Friday.

Senator Daniel Squadron introduced the bill in the State Senate simultaneously. He explained that currently the description of the body is entered into a system that tries to match it with missing people. Sometimes the information does not match up correctly, or a county has not registered a missing person yet. If the match is not made, often times the case is never resolved.

“It’s as easy as sending an email to all of the precincts throughout the state giving a description of the body and all of the identifying information that they have at the time,” said Lentol.

According to the ‘Missing Persons’ section on the NYC.gov website there are 23 missing persons in New York City.