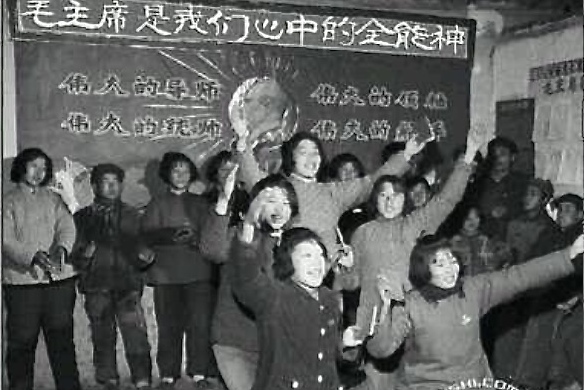 A mock poster was created by Chinese Internet users showing students worshiping Mao Zedong in the style of a cult. A Web editor in China was arrested after posting the photograph. (Screenshot via FreeWeibo.com)
China

After McDonalds Killing, an ‘Anti-Cult’ Campaign in China Backfires

The violent killing of a woman in a McDonald’s restaurant in eastern China recently set off a chain of antics that could likely take place in no other country in the world.

Videos of a man, with five companions, beating a young woman to death using a metal mop handle went viral in China last weekend. The incident took place on May 28 in the city of Zhaoyuan, Shandong Province.

The killers were quickly identified by the authorities as six followers of a religious sect, called Church of Almighty God, which is persecuted by the government. The media focus, and that of the government, quickly zoomed on the group itself, and over the following week cascaded into a typical, official-led mass campaign.

“Combatting Cults is an Urgent Matter,” a headline said in Global Times, the Party-run newspaper, on Tuesday.

In particular, a “cult list” of 14 groups officially identified as cults was published on Chinese media, raising heated discussion.

But when Chinese Internet users began comparing the Chinese Communist Party itself to a typical cult, the official response was much colder.

Internet users made a graphic titled, “How to Identify a Cult.” Among the characteristics were: “Cults are highly exclusive, and propagandize how great they are.” Another was “Cults are coercive, and use mind control techniques on others.” Cults also thrive on “an embedded network of personal relationships to protect their interests.”

Commenters quickly began making jokes about how all those characteristics apply to the Party itself. “We’re stuck under the rule of a cult!” one Internet user wrote. Another said, “The definition of a cult is exactly the same as the Party.”

All these posts were deleted from Chinese social media websites.

Zhao Mu, a blog editor for the Chinese Internet company Sohu, was arrested by police on June 5 after he was suspected of posting a doctored photograph linking Mao Zedong, the communist revolutionary, with the Church of Almighty God, implicated in the McDonald’s killing.

The photograph appeared to take a classic scene from the Cultural Revolution, where young children are singing the praises of Chairman Mao in a classroom. The writing above the blackboard—which was to be found, along with a Mao portrait, in classrooms across the country during the 1960s—said “Mao Zedong is the Almighty God in our Hearts.”

The term for “Almighty God” were the same three characters for the group targeted by the authorities.

Who Gets to Say?

Beyond the direct mockery that the authorities received, legal experts and civil rights lawyers also questioned the basis of defining a group as a “cult” in the first place—especially when followed up with harsh, state-led attacks.

Heng He, a political analyst with the New York-based New Tang Dynasty Television and with Epoch Times, said that none of the official organizations that identified the groups as cults—which included the Ministry of Public Security—are legislative bodies, and don’t have the right to define cults in a legal sense, or ban any group.

“How could they have the right to ban those groups as cults?” Heng He asked in a telephone interview.

“There’s no law in China that bans any certain religious group,” he added.

The Party instead uses a patchwork of extralegal measures and judicial definitions to carry out suppression of religious groups.

At least 10 people are reported to have been sentenced to prison in Guangdong, Henan, and Liaoning provinces for maintaining and distributing books and DVDs about the Church of Almighty God, and for hosting meetings related to it. The sentences vary from three to five years.

Zhang Tianliang, an independent political analyst who appears on Voice of America’s talk shows, said in an interview with NTD Television that the law should punish crimes rather than thoughts. “The government can’t arrest someone just because he or she believes in a sect, unless the person commits a crime … This is basic legal knowledge.”

While the authorities continued their campaign, bolstered by the official list designating the 14 cults, many in China were surprised with the absence of one group from the spotlight: Falun Gong, a traditional meditation practice based on the moral principles of truthfulness, compassion, and tolerance.

Falun Gong reached the height of mainstream popularity in China in the 1990s, until the Party began a high-profile persecution against it at the end of the decade. In October 1999, several months after the official campaign against Falun Gong began, the Communist Party and its propaganda organs began attacking Falun Gong using negatively charged religious labels. Falun Gong practitioners are persecuted to this day, including by arbitrary arrest, torture, forced ideological conversion, and in some cases extrajudicial killing. Thousands are confirmed to have been tortured to death or otherwise died in custody, according to the Falun Dafa Information Center, while researchers of organ harvesting from Falun Gong practitioners in China estimate that tens of thousands have been executed for their vital organs.

The lists used to identify “cults” have been around for many years, and Falun Gong has never been on them, said Heng He. He said this is because the Party was already fully committed to vilifying the practice using its propaganda channels, so listing it as such was apparently considered an unnecessary additional step.