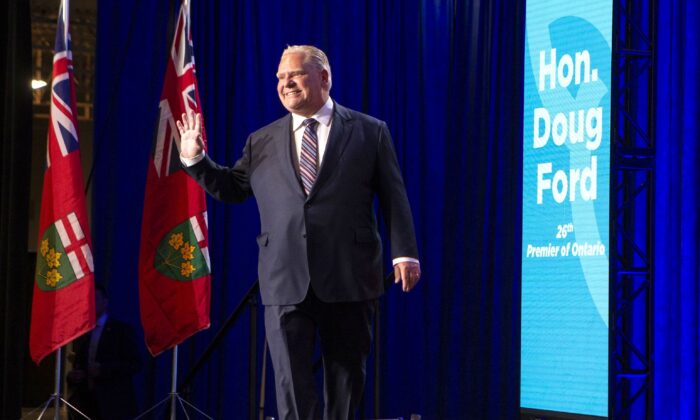 Ontario Premier Doug Ford waves as he arrives for a news conference in Toronto on June 3, 2022, after winning the provincial election. (The Canadian Press/Chris Young)
Canada

After Landslide Election Win, What Will Ford Do With a Stronger Hand?

The Doug Ford Progressive Conservatives have a fresh mandate with more seats, their main political opponents without leadership, and an economy-killing pandemic in the rear-view mirror. Even so, political experts are divided on whether Ford will use this new latitude to be more conservative in his approach, or follow a similar trajectory to his previous term in power.

Liberal Leader Steven Del Duca, who failed to win in Vaughan–Woodbridge, also resigned following the election. The party’s modest eight wins was only one seat more than last time, and they still lack official party status.

“In light of the election results, the Ford government will see little reason to govern in a more conservative fashion. They made gains by governing like Liberals and NDP in spending and especially in far-left social policy. They will not want to change what they see as a winning formula,” Haskell said in an interview.

By taking this approach, the Ford government let down some of its most dedicated supporters, he said, such as “those traditional conservatives who fought for bodily autonomy, medical privacy, freedom of conscience and information during the pandemic—the libertarian and social conservative types.”

One notable downside was the record-low voter turnout in the 2022 election. But Scott Bennett, professor of political science at Carleton University, doesn’t think the low turnout was altogether unusual.

“This was just an extreme example of a typical Canadian election where parties often win majorities with a relatively small part of the potential voting population. When many people do not vote, they are probably saying either there are no good alternatives or they are sufficiently satisfied with the incumbent government to not spend time on voting,” Bennett told The Epoch Times.

“Ford will govern as if he has a popular majority, and his only minor difficulty in this regard is that he has more caucus members to keep happy.”

Bennett expects this majority Ford government to act with similar substance to the previous one, but perhaps with better style.

“I think that the Ford government will move more aggressively in certain areas, but for the most part it will be done in a less petty and vindictive way than some of the actions at the beginning of their first term,” he said.

‘A Challenging Time to Govern’

Nelson Wiseman, professor emeritus of political science at the University of Toronto, says that although the PC’s popular vote of 40.8 percent “barely budged” from the 40.5 percent of 2018, the party will take a more aggressive approach to provincial debt.

“I think the Conservatives will govern more conservatively. I expect significant cuts to spending. As interest rates rise and government bonds roll over, there will be more spending to service the provincial debt, which is quite high compared to other provinces,” Wiseman told The Epoch Times.

“It will be a challenging time to govern in a context of stagflation. In addition to belt-tightening, there may be more fees for services and possibly even some tax increases.”

“It will be interesting to see how the provincial government handles the health portfolio given the possibility of new federal money to expand dental and pharmaceutical coverage. It is one of those things that looks good initially, but will further confuse provincial finances in the long run,” he said.

‘Not a Sustainable Winning Formula’

Haskell believes education will prove a political challenge in ideological, not just fiscal, ways. He says the Ford government’s endorsement of Bill 67 to introduce critical race theory in schools is one sign that the party has lost its conservative moorings.

“The Ford government thinks they’ve found a winning formula, but the problem is that it is not a sustainable winning formula. The problem with calling yourself a conservative and governing like a political party of the left is that ultimately reality comes knocking and your citizens begin to suffer. It can be economic collapse or societal breakdown or both, but ultimately the cracks show and people begin to see the harmful nature of your policies,” he said.

He says the collapse in support for the Ontario Liberals could repeat for the PCs.

“On the education front alone, the cracks are already beginning to show. Parents’ groups are organizing against the radical gender and race agenda being implemented in Ontario schools and they blame the Ford government for enabling it.”

“Let us not underestimate what New Blue and the Ontario Party did achieve,” Bennett said.

“I would not write them off yet. I think many people who stayed home in this low turnout election would have supported these new parties had they had more of a public profile and related resources.”