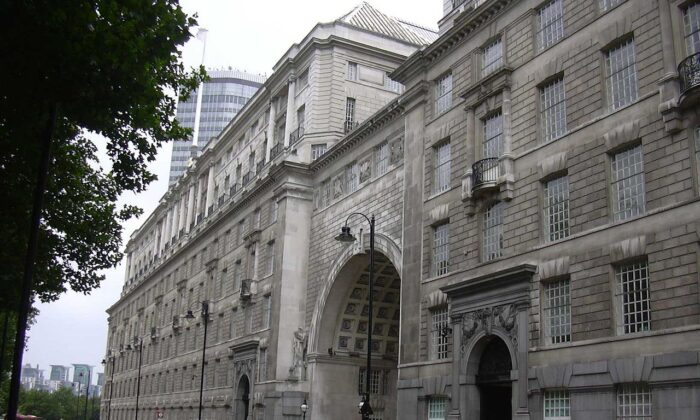 Thames House (L) which houses the London offices of MI5 is seen from Lambeth Bridge in London in this file photo. (Cnbrb/CC BY-SA 3.0 via Wikipedia Commons)
UK

MI5, MI6, and GCHQ will need “prior independent authorisation,” probably from a judge, before it can access communications data from telecom providers of people they are investigating after a “landmark” case at the High Court in London.

The UK civil rights campaign group, Liberty, launched a legal challenge against the powers used by the security services during criminal investigations.

Liberty lawyer Megan Goulding said: “This judgment is a major victory in the fight against mass surveillance. The court has agreed that it’s too easy for the security services to get their hands on our data. From now on, when investigating crime, MI5, MI6, and GCHQ will have to obtain independent authorisation before being able to access our communications data.”

A Liberty spokeswoman said: “Since 2016, the Investigatory Powers Act—otherwise known as the Snoopers’ Charter—has provided state agencies access to our private communications and personal information regardless of whether they suspect us of any wrongdoing. Data that can be accessed under the act includes telephone records, text messages, location history, and internet browsing history.”

“The court ruled that there are insufficient safeguards within the act when it comes to the security services obtaining people’s private data,” she added.

The ruling did not make it clear from whom they would need to obtain “independent authorisation” but Liberty said it would probably be from a judge or the Office for Communications Data Authorisations (OCDA).

In 2015—two years after William Snowden revealed U.S. agencies were collecting details of every phone call—the existence of “practices for the acquisition and use of bulk communications data by the security and intelligence agencies of the UK was made public,” in a report by Parliament’s Intelligence and Security Committee.

The campaign group, Privacy International, brought a complaint before the Investigatory Powers Tribunal (IPT), challenging the lawfulness of what they saw as “trawling.”

The IPT ruled, in July 2021, that a section of the 1984 Telecommunications Act which allowed such unfettered access was incompatible with E.U. law but the Home Secretary stated it was “necessary in the interests of national security” and was “proportionate to what was sought to be achieved.”

The High Court judges rejected that assertion and Liberty says it will mean the security services will have to operate like the police, who need authorisation from a judge in order to get a search warrant or permission to tap an individual’s phone.

The judges said: “When the security and intelligence agencies act for an ordinary criminal purpose, we cannot see any logical or practical reason why they should not be subject to the same legal regime as the police. The mere fact that in general they operate in the field of national security cannot suffice for this purpose.”

A government spokesman told The Epoch Times, in an email: “We welcome today’s judgment and will take further time to consider the implications of this ruling.”

He added: “The UK has one of the most robust and transparent oversight regimes for the protection of personal data and privacy anywhere in the world. The Investigatory Powers Act 2016 is a leading piece of legislation internationally which contains strict requirements of necessity and proportionality as well as providing other significant safeguards and independent oversight to guard against abuse.”