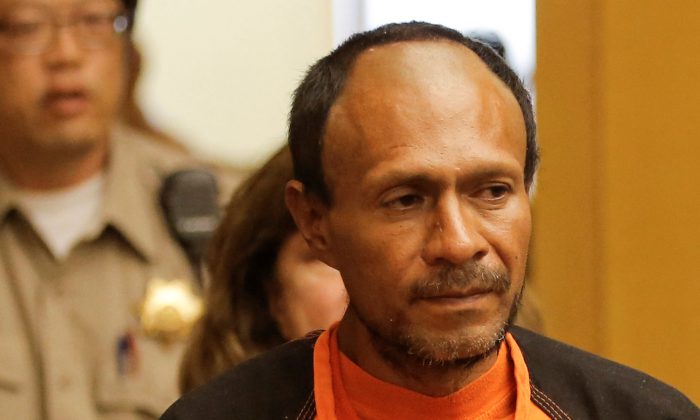 Jose Ines Garcia Zarate, arrested in connection with the July 1, 2015, shooting of Kate Steinle on a pier in San Francisco is led into the Hall of Justice for his arraignment in San Francisco, Calif., on July 7, 2015. (Michael Macor/Reuters)
Crime and Incidents

WASHINGTON—Days after a jury acquitted Jose Ines Garcia Zarate in the fatal shooting of Kate Steinle in 2015, a federal grand jury has indicted him.

On Dec. 5, the Department of Justice said Garcia Zarate is now facing federal charges in San Francisco. Garcia Zarate, 47, was previously known as Juan Francisco Lopez-Sanchez. He is a Mexican national who has been deported from the United States five times previously.

If convicted of either violation, Garcia Zarate faces a maximum statutory penalty of 10 years in prison. He is currently being held in San Francisco County Jail on other charges.

He was found guilty only of the lesser charge of being a felon in possession of a firearm.

Garcia Zarate fatally shot 32-year-old Steinle with a stolen gun on a San Francisco pier in June 2015. Steinle was walking with her father at the time.

Garcia Zarate had been released in March 2015 after a San Francisco jail refused to transfer custody of him to Immigration and Customs Enforcement (ICE) after receiving a detainer request.

After the verdict, Attorney General Jeff Sessions condemned cities that refuse to cooperate with ICE.

“San Francisco’s decision to protect criminal aliens led to the preventable and heartbreaking death of Kate Steinle,” sessions said in a statement on Nov. 30.

“While the state of California sought a murder charge for the man who caused Ms. Steinle’s death—a man who would not have been on the streets of San Francisco if the city simply honored an ICE detainer—the people ultimately convicted him of felon in possession of a firearm.”

Sessions said the Justice Department will continue to urge jurisdictions to consider the safety of their communities above “the convenience of criminal aliens.”

President Donald Trump reacted to the verdict with a barrage of tweets condemning Democratic leadership and illegal immigration.

“A disgraceful verdict in the Kate Steinle case! No wonder the people of our Country are so angry with Illegal Immigration,” he tweeted on Nov. 30 after the verdict.

Early the next morning, Trump continued, “The Kate Steinle killer came back and back over the weakly protected Obama border, always committing crimes and being violent, and yet this info was not used in court. His exoneration is a complete travesty of justice. BUILD THE WALL!”

“The jury was not told the killer of Kate was a 7 time felon. The Schumer/Pelosi Democrats are so weak on Crime that they will pay a big price in the 2018 and 2020 Elections,” Trump tweeted.

The jury was not told the killer of Kate was a 7 time felon. The Schumer/Pelosi Democrats are so weak on Crime that they will pay a big price in the 2018 and 2020 Elections.