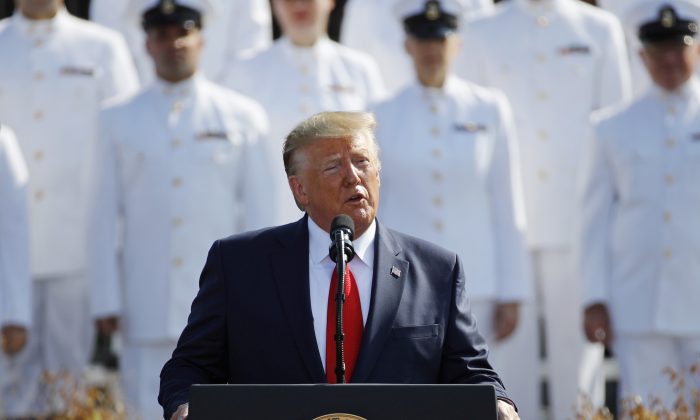 President Donald Trump speaks during a ceremony in observance of the 18th anniversary of the Sept. 11 attacks at the Pentagon in Washington on Sept. 11, 2019. (Patrick Semansky/AP Photo)
Trump Administration

After Impeachment Inquiry Is Launched, Trump Says Democrats Are Frozen by ‘Hatred’ and ‘Fear’

President Donald Trump, less than a day after House Speaker Nancy Pelosi announced they would launch an inquiry into impeachment, laid into the Democrats in a series of Twitter posts on Sept. 25.

The Democrats, he said, are driven by two things: “Hatred and fear.”

And as a result, “they get nothing done,” Trump wrote at around 7 a.m. ET on Wednesday.

There has been no President in the history of our Country who has been treated so badly as I have. The Democrats are frozen with hatred and fear. They get nothing done. This should never be allowed to happen to another President. Witch Hunt!

Last week, The Wall Street Journal reported that Trump allegedly pressed Ukrainian President Volodymyr Zelensky during a July phone call to investigate former Vice President Joe Biden and his son, Hunter. It prompted Trump on Tuesday to say that he would release the transcript of the phone call.

At around 9 a.m. on Wednesday, Trump tweeted in reference to the transcript, which hasn’t been released yet, and asked, “Will the Democrats apologize after seeing what was said on the call with the Ukrainian President?”

However, Pelosi, during a Tuesday press conference, said that the “House of Representatives is moving forward with an official impeachment inquiry,” setting up a clash about a year ahead of the 2020 presidential election.

The inquiry marks just the fourth time in American history that a president has faced the threat of impeachment. The last one was former President Bill Clinton, who was acquitted by the Senate.

“This week, the president has admitted to asking the president of Ukraine to take actions which would benefit him politically,” Pelosi said. “The actions of the Trump presidency revealed dishonorable facts of the president’s betrayal of his oath of office, betrayal of national security, and betrayal of the integrity of our elections.”

Pelosi and Democrats have also claimed that the Trump administration violated the law by not handing over a whistleblower complaint about Trump’s July call, adding that he also used military aid as leverage. Trump has denied the allegations.

The call with Zelensky, he said on Twitter, was “very friendly and totally appropriate.”

He added there was “no pressure and, unlike Joe Biden and his son, NO quid pro quo,” referring to the allegation that he used the military aid as a bargaining chip. “This is nothing more than a continuation of the Greatest and most Destructive Witch Hunt of all time!” the president wrote.

The founders of the United States included impeachment as part of of the U.S. Constitution, saying the House has “the sole power of impeachment” while the Senate has the “sole power to try all impeachments.” The chief justice of the Supreme Court, meanwhile, will preside over impeachment trials in the Senate, according to the U.S. Senate’s website.

A sitting president can be removed for “treason, bribery, or other high crimes and misdemeanors,” according to the site.

Former President Bill Clinton was the last president to be impeached, which happened in December 1998, on charges of lying under oath and obstruction of justice. He was later acquitted.

Before that, former President Andrew Johnson was impeached on charges of violating the Tenure of Office Act, but was later acquitted, according to the House website.