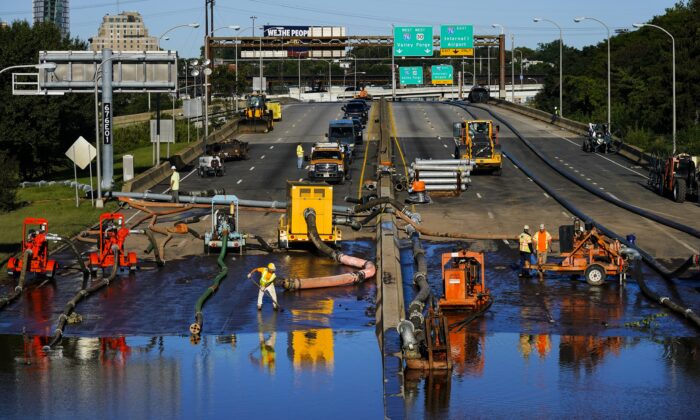 Workers pump water from a flooded section of Interstate 676 in Philadelphia, on Sept. 3, 2021. (Matt Rourke/AP Photo)
US News

After Ida Soaks Northeast US, Cleanup and Mourning Continues

The cleanup—and mourning—continued Friday as the Northeast United States recovered from record-breaking rainfall from the remnants of Hurricane Ida.

At least 48 people in five states died as storm water cascaded into people’s homes and engulfed automobiles, overwhelming urban drainage systems never meant to handle so much rain in such a short time.

The toll was highest in New Jersey, where at least 25 people perished in heavy rains that began late Wednesday. A majority were people who drowned after their vehicles were caught in flash floods, some dying in their submerged cars, some getting swept away after exiting into fast-moving water.

Floodwaters and a falling tree also took lives in Maryland, Pennsylvania, Connecticut, and New York. In New York City, 11 people died when they were unable to escape rising water in basement apartments.

Authorities said the work of searching for possible victims and identifying the dead wasn’t over.

In Philadelphia, parts of the Vine Street Expressway, a major east-west artery through the heart of the city, were still underwater Friday morning as crews worked seven large pumps to drain it. An inch-thick layer of muck was left behind in the portions that were drying out. Pennsylvania’s transportation department had no estimate on when the heavily trafficked interstate would completely reopen.

Leaders in some states also pledged to examine whether anything could be done to prevent a catastrophe like this from happening again.

New Jersey and New York have both spent billions of dollars improving flood defenses after Superstorm Sandy hit the region in 2012, but much of that work was focused on the coasts and tidal floodplains.

President Joe Biden late Thursday approved disaster declarations for both states. The federal action was issued to mobilize agencies to provide assistance to areas hardest hit by the storm.

“One thing I want to make clear: we’re not treating this as if it’s not going to happen again for 500 years,” she said.

Ida came ashore in Louisiana on Sunday tied as the fifth-strongest storm to ever hit the U.S. mainland, then moved north and east dumping torrential rain all week.

Forecasters had warned of potentially dangerous hazardous flooding, but the ferocity of the storm caught the nation’s most densely populated metropolitan corridor by surprise.

One person died in Maryland and at least five in Pennsylvania, where some neighborhoods alongside the Schuylkill River in Philadelphia remained partly underwater. A Connecticut state police sergeant died after his cruiser was swept away. In one New York City basement apartment, a 2-year-old boy died along with his parents when they couldn’t escape rising water.

The National Weather Service said the storm also spawned at least 10 tornadoes, the most serious of which destroyed homes in Mullica Hill, New Jersey, south of Philadelphia.