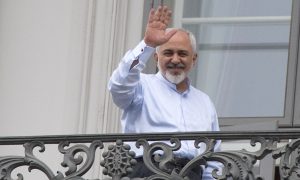 With Historic Nuke Deal in Sight, US and Iran Dig In
0

VIENNA—Overcoming decades of hostility, Iran, the United States, and five other world powers struck a historic accord Tuesday to check Tehran’s nuclear efforts short of building a bomb. The agreement could give Iran access to billions in frozen assets and oil revenue, stave off more U.S. military action in the Middle East, and reshape the tumultuous region.

The deal sets in motion a years-long test of Iran’s willingness to keep its promises to the world—and the ability of international inspectors to monitor compliance. It also sets the White House up for a contentious fight with a wary Congress and more rocky relations with Israel, whose leaders furiously opposed the agreement.

Appealing to skeptics, President Barack Obama declared that the accord “offers an opportunity to move in a new direction. We should seize it.”

Under the terms of the deal, the culmination of 20 months of arduous diplomacy, Iran must dismantle much of its nuclear program in order to secure relief from biting sanctions that have battered its economy. International inspectors can now press for visits to Iran’s military facilities, though access is not guaranteed. Centrifuges will keep spinning, though in lesser quantities, and uranium can still be enriched, though at lower levels.

In a key compromise, Iran agreed to the continuation of the U.N.’s arms embargo on the country for up to five more years and ballistic missile restrictions for up to eight years. Washington had sought to keep the arms ban in place, while Russia and China joined Iran in pushing for an immediate suspension.

On the streets of Tehran, Iranians honked their horns and celebrated in the city’s main square. President Hassan Rouhani said a “new chapter” had begun in his nation’s relations with the world, even as he denied Iran had ever pursued a nuclear weapon.

While the U.S. partnered in the talks with Britain, France, Germany, Russia, and China, the decades of tensions between the U.S. and Iran put the two countries at the forefront of the negotiations.

Whether the nuclear rapprochement will spark a broader thaw is unclear. Nearly 40 years after Iran’s Islamic revolution and the hostage-taking at the U.S. Embassy in Tehran, the country’s hardliners remain hostile toward Washington. The U.S. and its allies also have deep concerns about Iran’s support for terrorism in the Middle East and its detention of several American citizens.

With Historic Nuke Deal in Sight, US and Iran Dig In

With key restrictions on Iran’s nuclear program required for only a decade, opponents of the deal say it simply delays Tehran’s pursuit of the bomb. Critics also say Iran will use new wealth from sanctions relief to double-down on other destabilizing activities in the region.

Iran stands to receive more than $100 billion in assets that have been frozen overseas and benefit from an end to various financial restrictions on Iranian banks. Iran could also sell more oil, bringing down crude prices.

Israeli Prime Minister Benjamin Netanyahu, who lobbied unceasingly against a deal, called it a “stunning historic mistake” and warned that his country would not be bound by it. Netanyahu strongly hinted that Israeli military action to destroy Tehran’s nuclear program remains an option.

Obama and Netanyahu, who have long had a cool relationship, spoke by phone Tuesday. White House officials said Obama also called King Salman of Saudi Arabia, one of the many Sunni Arab rivals of Shiite Iran who have expressed concerns about the deal.

On Capitol Hill, Republicans accused Obama of making too many concessions. House Speaker John Boehner of Ohio said lawmakers “will fight a bad deal that is wrong for our national security and wrong for our country.” GOP presidential hopefuls also panned the deal, some vowing to scrap it if elected to succeed Obama.

Obama did get a crucial show of support from Hillary Rodham Clinton, his former secretary of state and the likely Democratic presidential nominee. She praised the deal as an important step toward “putting the lid on Iran’s nuclear program.”

Clinton’s support could give some Democratic lawmakers more confidence in standing with Obama as he tries to hold off congressional efforts to disrupt the deal. Congress has 60 days to review it and can try to prevent Obama from waiving sanctions on Iran as promised in the negotiations.

The president reiterated that he would veto any legislation aimed at upending the agreement. Defending it, he said, “No deal means a greater chance of more war in the Middle East.”

The deal comes after years of international diplomacy that until recently were defined by failure. Breaks in the talks sometimes lasted for months, and Iran’s nascent nuclear program expanded into one that Western intelligence agencies saw as only months away from weapons capacity. The U.S. and Israel both threatened military action.

Obama took office in 2009, promising to keep the door open for greater engagement with Iran, even as he ratcheted up economic sanctions. In 2012, he authorized secret talks that helped lay the groundwork for the formal negotiations that stretched over the past two years.

The final weeks were marked by marathon meetings in Vienna, three blown deadlines, and threats by top American and Iranian diplomats to walk away.

Secretary of State John Kerry, who did most of the bargaining with Iranian Foreign Minister Mohammad Javad Zarif, said persistence paid off. “Believe me, had we been willing to settle for a lesser deal we would have finished this negotiation a long time ago,” he said.

Iran agreed to a continuation of the arms embargo for up to five more years, though it could end earlier if the International Atomic Energy Agency (IAEA) finds Iran not conducting any current work on nuclear weapons. A similar condition was put on U.N. restrictions on the transfer of ballistic missile technology to Tehran, which could last for up to eight more years, according to diplomats.

Washington had sought to maintain the ban on Iran importing and exporting weapons, concerned that an Islamic Republic flush with cash from sanctions relief would expand its military assistance for Syrian President Bashar Assad’s government, Yemen’s Houthi rebels, the Lebanese militant group Hezbollah, and other forces opposing America’s Middle East allies such as Saudi Arabia and Israel.

Another significant agreement will allow U.N. inspectors to press for visits to Iranian military sites as part of their monitoring duties, something that Iran’s supreme leader, Ayatollah Ali Khamenei, has opposed. However, access isn’t guaranteed and could be delayed, a condition that critics of the deal are sure to seize on.

Under the accord, Tehran would have the right to challenge U.N requests, and an arbitration board composed of Iran and the six world powers would then decide on how to proceed. The IAEA also wants to complete its long-stymied investigation of past weapons work by Iran, and the U.S. says Iranian cooperation is needed for all economic sanctions to be lifted.

IAEA chief Yukiya Amano said Tuesday that his agency and Iran had signed a “roadmap” to resolve outstanding concerns, hopefully by mid-December.