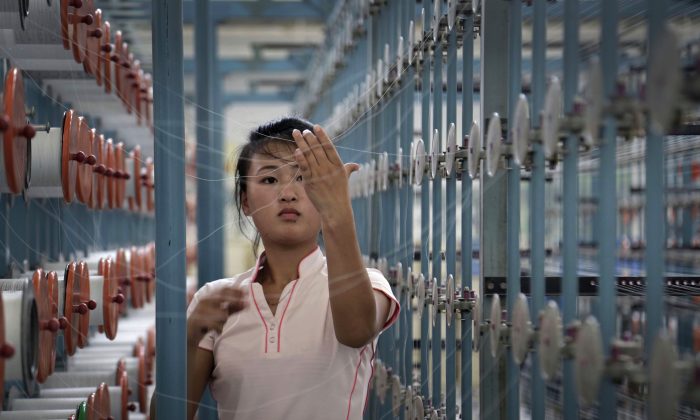 A North Korean woman works at the Kim Jong Suk Pyongyang textile factory, in Pyongyang, North Korea, on July 31, 2014. After ringing in the new year with claims of its first successful hydrogen bomb test, North Korea is now calling on the United States and the world community to accept it as a nuclear power, jettison the pursuit of punitive sanctions and allow it to focus on what it really wants: build up the nation’s troubled economy. (AP Photo/Wong Maye-E)
Asia & Pacific

After H-bomb Test, North Korea Wants to Focus on Economy

PYONGYANG, North Korea—After ringing in the new year with claims of its first successful hydrogen bomb test, North Korea is now calling on the United States and the world community to accept it as a nuclear power, jettison the pursuit of punitive sanctions and allow it to focus on what it really wants: build up the nation’s troubled economy.

While waiting to see what kind of new sanctions might be imposed by the United States, the United Nations and others, North Korean officials say that with the test now out of the way they want the U.S. and its allies to back off and allow them to turn their attention toward peaceful economic growth, as promised by leader Kim Jong Un in his New Year address.

“The U.S. should be accustomed to the status of the DPRK as a nuclear weapons state whether it likes it or not,” a Foreign Ministry spokesman said in a statement issued Friday, adding that the North will continue to bolster “in every way” its ability to field nuclear weapons to cope with the “ceaseless provocations” emanating from Washington.

Reflecting Pyongyang’s concerns over the looming threat of sanctions, the statement struck a deliberately conciliatory tone by adding that the North stands by its previous offers to put a moratorium on nuclear tests and seek a peace treaty to formally end the Korean War if the United States halts its annual military exercises with the South—an offer Washington has repeatedly ignored in the past.

It also said the North would not use the weapons recklessly.

But the statement then switched back to defiant mode, accusing the United Nations of rushing to “fabricate a resolution on sanctions aimed at such hostile acts as hamstringing our efforts for peaceful economic construction and the improvement of the people’s standard of living.”

While it may be wishful thing on Pyongyang’s part to expect a quick welcome into the nuclear club, the statement and others made recently by North Korean officials through the state-run media accurately reflect Kim Jong Un’s twin goals of bolstering the country’s nuclear deterrent, whatever sanctions that may bring, while at the same time improving domestic living standards.

“The DPRK is not interested in aggravating the situation as it is channeling all its efforts into the building of an economic power,” the spokesman said, adding that Pyongyang’s “primary task for this year is to develop economy and improve the people’s standard of living and to that end it requires stable situation and peaceful climate more than any time.”

Just exactly how it intends to invigorate its centrally controlled, isolated and inefficient domestic economy remains to be seen, especially if it continues to refuse to bow to international pressure on its nuclear program and development of the long-range missiles needed to deliver them to targets on the U.S. mainland.

But North Korea’s ruling regime—pushed by realities on the ground—does appear to be genuinely considering at least some kind of economic reform.

Kim Jong Un has decided to convene a major party congress in May, the first of its kind in decades, and some analysts believe that could be an opportunity for the North to announce significant new economic policies. However, few expect Kim to stray too far from the principles of self-reliance and old-school socialism that were set down by his father, Kim Jong Il, and grandfather, national founder Kim Il Sung.

Official proclamations that the country must stick to its old socialist ideals notwithstanding, there has been an upsurge since the famine years of the 1990s in entrepreneurial activity and quasi-market-style capitalism that has spawned a growing number of citizens, particularly in Pyongyang, the North’s relatively affluent capital, who now make up a nascent middle class.

That demographic is able to afford to buy more goods and services, fueling a demand and supply cycle that is being met by business-minded individuals operating either with the government turning a blind eye or providing some sort of support, often in return for a cut of the profits.

The conundrum for the North is that while the rise of a middle class and the inevitable problem of creative destruction that comes with a free market economy would pose a threat to its status quo, its ruling regime knows it must get out in front of its economic problems to maintain control and to retain credibility among a populace increasingly aware of the gap between their living conditions and those in capitalist rival South Korea and in post-economic reform China.