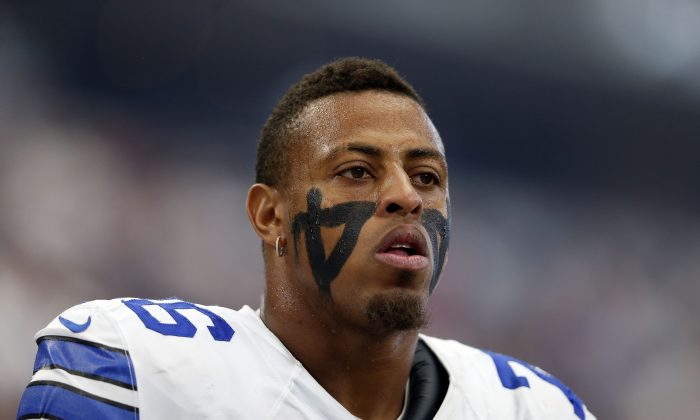 Defensive end Greg Hardy #76 of the Dallas Cowboys on the sidelines before a game against the New England Patriots at AT&T Stadium on October 11, 2015 in Arlington, Texas. (Photo by Christian Petersen/Getty Images)
NFL

After Greg Hardy Victim Pictures Surface, ESPN Commentator Says He Should Be Removed From NFL

After alleged pictures of Greg Hardy’s ex-girlfriend surfaced recently, the outcry has been to remove the Dallas Cowboys player from the NFL for an undetermined amount of time.

ESPN commentator Stephen A. Smith is among those saying the Cowboys should cut Hardy, one of their biggest stars, after the photos of Nicole Holder’s bruises and other injuries surfaced on Deadspin.

Holder says she was beaten by Hardy and that he threatened to–and nearly–killed her, although she later accepted a settlement and Hardy was never convicted of any crime.

This is why NFL star Greg Hardy was arrested for assaulting his ex-girlfriend https://t.co/8OZijp2R6F pic.twitter.com/pj3NAo4nrd

“What we’re talking about here is a guy who doesn’t deserve to be on an NFL roster. He needs to just be cut immediately,” Smith said.

“Let’s just be clear and I don’t want to be a hypocrite here because, again, we live in a very visual society and I’m a victim of that from the perspective of when I saw those pictures for the first time Friday, I said ‘My God, why is this guy in the NFL?'”

Smith initially supported Hardy in the case, but noted that pictures were very “impactful.”

Stephen A. Smith says Cowboys DE Greg Hardy doesn’t deserve to be on a roster and should be cut immediately. https://t.co/ANe6aOEXnP

But Smith and others might not get their wish, because Cowboys owner Jerry Jones released a statement supporting Hardy.

“While we did not have access to the photos that became public today, we were and are aware of the serious nature of this incident. We as an organization take this very seriously. We do not condone domestic violence,” he said.

#Cowboys owner Jerry Jones released a statement on Greg Hardy saying they were aware of the seriousness of it all pic.twitter.com/2iUbV6Rnh9

“We entered into the agreement with Greg fully understanding that there would be scrutiny and criticism. We have given Greg a second chance. He is a member of our team and someone who is grateful for the opportunity he has been given to move forward with his life and his career.”

The defensive end was signed to a one-year, $11.3 million contract before this season.