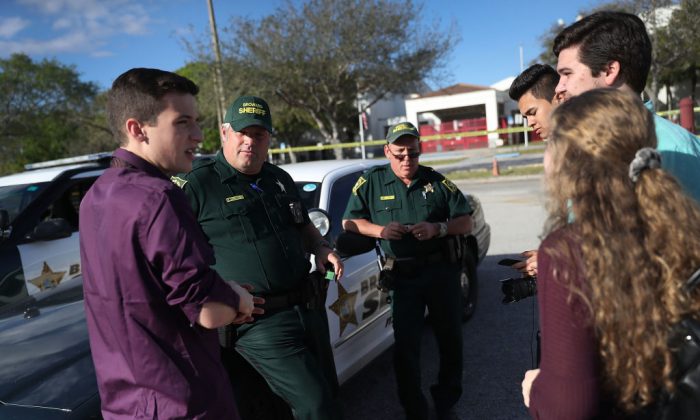 Only deputies who are “qualified and trained” will carry the rifles, he added, reported NBC.

“When they are not carrying the rifle, until we look for gun locks and gun lockers, the only place when they’re not slinging the rifle, that will be allowed to be stored, will be in their locked police vehicle,” said Israel.

The Broward County Chiefs of Police Association is working with the school district to identify certain offices where the rifles could be locked during the day when the officers aren’t using them, reported the Sun-Sentinel.

Several police departments have asked the district to allow that for years, according to Margate Police Chief Dana Watson.

“If the car is in the parking lot, it might not be as accessible,” he said. “The police car can be a half-mile away. You have to run past the shooter to get your rifle?”

Coral Springs Police Chief Tony Pustizzi said he’s even offered to have his agency pay for safes to put in schools to store the guns.

“Officers cannot compete with assault rifles with their regular duty handguns,” Pustizzi said. “We have to go in and combat militaristic tactics and weapons. … It looks bad: Can you imagine someone videotaping an officer running away from the school?”

Nikolas Cruz has confessed to shooting at teachers and students on Feb. 14 at Marjory Stoneman Douglas High School in Parkland, Florida, leaving 17 people dead and a number of others wounded.

Cruz was charged with 17 counts of premeditated murder the next day.

The high school had one armed resource officer inside at the time of the shooting but the officer never faced the shooter.

Israel said the actions of the officer on that day are part of the investigation into the shooting.

The FBI was warned multiple times about Cruz but didn’t respond before the shooting.

Cruz made threats online on multiple social media websites, prompting people to report him. However, the FBI said that it could not identify Cruz despite him using his given name as his screen name on all of the sites.