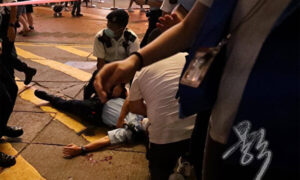 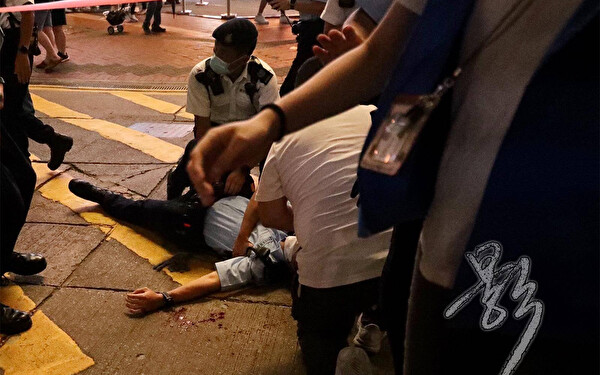 A man by the name of Leung Kin-Fai stabbed a policeman on duty in Causeway Bay and then stabbed himself in the chest in Hong Kong, on July 1, 2021. (Bai Ying/The Epoch Times)
HK Current Affairs

The Hong Kong Journalists Association (HKJA) issued a statement on July 27, protesting the Hong Kong police searching the home of a reporter who had provided information about an assault, and seizing her computers, phones, and travel passes.

At around 10 p.m. on July 1, a man by the name of Leung Kin-Fai stabbed a policeman on duty in Causeway Bay. Leung then stabbed himself in the chest. A Large number of reporters covered the scene at the time, including one who live streamed her report.

The police then contacted several reporters, one of whom had seen the reporter live streaming the event. The day after the incident, the reporter, accompanied by a lawyer arranged by the HKJA, went to the Hong Kong Police Headquarters to give a statement to the Commercial Crime Bureau officer in charge of investigating the case.

The police promised that if they needed to contact the reporter in the future, they would do so through her lawyer and inform the HKJA. The police also said that the reporter had been summoned to “assist the investigation.”

However, at 11 p.m. on July 26, officers from the National Security Department of the Hong Kong Police Force went to the reporter’s temporary residence, without notifying her lawyer or HKJA, and took her away so she could further cooperate with the investigation. Her residence was searched and her travel documents were held.

According to the HKJA, after being taken away, the reporter called her lawyer, while in the presence of a National Security officer, and said she did not need a lawyer. Only a friend accompanied him during the deposition and when she was taken back to her original residence, where police further collected the “evidence” they needed.

Having learned about the incident, the Journalist Association immediately complained to the police. After a lot of mediation, the lawyer representing the association arrived at Chai Wan Division Police Station at 1 a.m. on July 27, and accompanied the reporter as she made a statement. She did not leave the police station until 5:30 a.m.

According to Hong Kong police, the National Security Department obtained a warrant, issued by a designated magistrate, to search two premises and retrieve computers and radiophones on the night of July 26. The case is still under investigation and no arrests have been made.

The HKJA stressed that a reporter who filmed a suspected crime during a live streaming was merely doing her journalistic duty and should not be treated as a criminal when she had already assisted the police in their investigation.

The association demanded that the police immediately explain whether the reporter was summoned to “assist the investigation” and, if so, why her house was searched and her travel documents confiscated. And, explain whether any person who acts as, or may act as, a witness in a future case is at risk of having her or her travel documents confiscated.

The association also stressed that the incident is a threat to journalists throughout Hong Kong. It asked how journalists can continue to work in peace if recording an incident will expose them to suspicion? The HKJA said the the current actions of the National Security Department are affecting—even “threatening”—to journalists all over Hong Kong.

The HKJA urges the police to respond immediately to the incident, and calls on the industry to join forces to protect their rights.