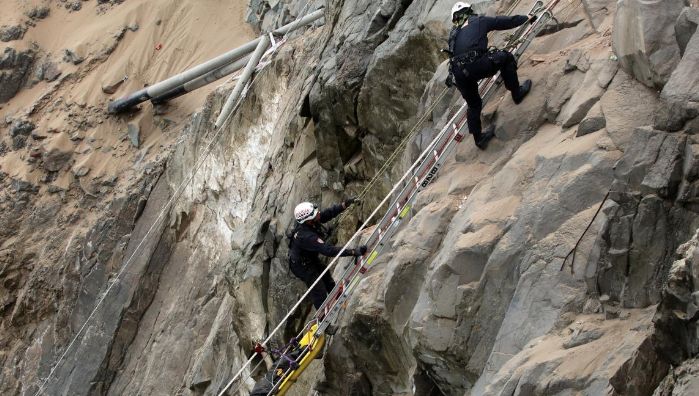 Rescue workers carry victims after a bus crashed with a truck and careened off a cliff along a sharply curving highway north of Lima, Peru, January 3, 2018. (REUTERS/Guadalupe Pardo)
Americas

Near a bus crash on a highway called Devil’s Curve in Peru that left at least 52 people dead, officials made a grisly discovery.

The bus drove off a cliff after it collided with a truck on the highway north of Lima, officials told Reuters. The cause of the accident is not clear. The accident on Tuesday took place on the Panamericana Norte highway near the area of Pasamayo on the Pacific coast.

The new death toll of 48 was updated from 36 people, according to Lewis Mejia Prada, a representative of the local fire-fighting company, and police late Tuesday, the news agency reported.

The Mirror reported Monday that the charred body of a woman was found inside a suitcase close to the site where the bus had crashed. The suitcase was discovered about a mile away by police from Chancay and Huaral in the district of Aucallama.

It’s not clear if the finding was linked to the bus crash. A police investigation is ongoing, the Mirror reported.

Local media reported that the woman was wearing sneakers and jeans. Officials think the body was burned to get rid of the evidence, according to the report.

Forensic experts and members of the missing persons unit from Lima are on the scene.

Death toll in Peru bus crash rises to 48 after the vehicle plunged 100 metres off a cliff onto a rocky beach https://t.co/cGS14HLCYf pic.twitter.com/FRje1qMWpW