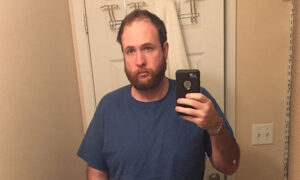 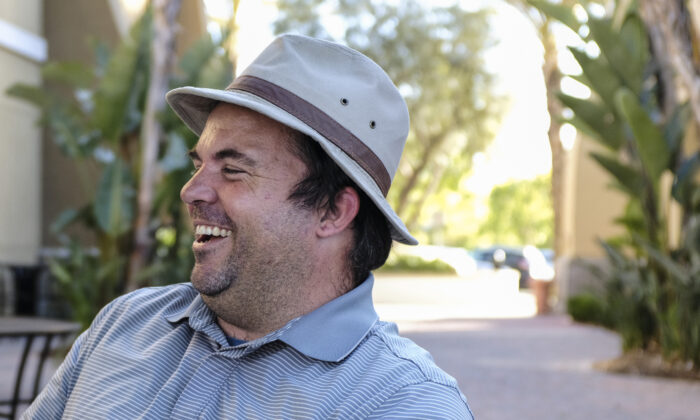 As 26-year-old Byron Remeyer picked up his guitar and looked at his audience, he quickly estimated that a thousand people had their eyes on him as he prepared to perform. Though it was early in his music career, large crowds didn’t make him nervous.

It was the closing ceremony of the 2013 class of The Calvary Chapel School of Worship, where he was about to graduate with a college degree, and he was set to sing a rendition of Hillsong United’s “God is Able.”

“I chose to sing it because nothing is impossible with God,” Remeyer told The Epoch Times.

“The reason I remember the performance I did that day was because the video of it was sent to me a month after I got home from the hospital.”

It was on Aug. 2, 2013, just months after graduating, that Remeyer’s hidden struggle with alcoholism nearly killed him.

That day, Remeyer was a passenger in a vehicle with an intoxicated driver who caused a car crash. The impact caused the vehicle to wrap itself around a tree off of Crown Valley Parkway in Laguna Niguel, California.

Both Remeyer and the driver were found unconscious by first responders.

“I was told my head was in the bushes and tree upon impact and that I was mere inches from losing my head,” he said.

“Emergency services had to use the jaws of life to retrieve my body from the wreckage.”

Sixty-eight days later at Viejo’s Mission Hospital, Remeyer finally woke up from a coma but without the ability to use his body. He suffered from a broken neck, fractured occipital bone and clavicle, and a traumatic brain injury—which according to the CDC is a major cause of disability and death.

“I was told that I would potentially not recover. Even the therapists said I would never walk again,” Remeyer said.

“But I was not going to give up, because my God does miracles.”

After awakening from his months-long coma, Remeyer came to the realization that his struggle with alcohol was his way of trying to deal with and end the hurts and struggles in life that had caused him to lose hope. The mistake of giving in to his emotional despair came at the ultimate cost of relearning how to move his own body—almost like being reborn as a newborn infant.

“I remember asking God why He let me live as my first prayer after waking up,” Remeyer said.

“I remember the shame, the excitement, and the embarrassment of being naked in the hospital with groups of loved ones around. I was so frustrated and overwhelmed asking God why he let me live only to be fully paralyzed. But I was also so amazed by the support and fellowship I had and the prayers that people had prayed over me.”

After a total of 91 days in the hospital, Remeyer’s mother Colleen, who happened to be an experienced at-home caregiver at Lorien Health Care, took her son home to Dana Point, California, where she continued to work with him, first in rebuilding his strength and then connecting him with rehabilitation specialists. The difficulty immediately prompted Remeyer to request an electric wheelchair for faster mobility.

“Over my dead body you’re getting one of those!” Colleen exclaimed to her son.

“You are going to walk again, Byron, and that is not going to help you do that.”

Even as an experienced caregiver, Colleen credits God and her community for staying emotionally strong for her son during the biggest challenge he had ever faced.

“I had faith in God that my son would be OK. My community and church were very supportive and my father provided us a roof over our heads as we got through that challenging time,” she said.

Remeyer was finally connected with therapist and ex-NFL Detroit Lions football player Brad Buddy, who like him was a Christian.

One day after a therapy session, Buddy asked Remeyer for his opinion on a church flyer he was designing when the printed words “WAKE UP CALL” on the paper display immediately caught Remeyer’s attention. Those words suddenly brought him back to the last alcohol recovery class he had attended just prior to his accident.

“It was right there when I remembered the prayer I had prayed at my Celebrate Recovery class,” Remeyer said.

“I prayed to God for a wake-up call.”

“I sat there paralyzed in that moment with Buddy because what I was experiencing was the wake-up call that I had prayed for.”

It was soon after this realization that Remeyer was contacted by friend and Trabuco Hills High School teacher Jenny Benda to speak on campus about drinking and driving.

For Remeyer, it was an important opportunity to not only speak with students, but also because this was his former high school and this was the place where his alcoholism had progressed habitually.

“They asked me to share my story in front of a student assembly at my old high school and to share the consequences of drinking and driving, which I humbly accepted.”

The assembly went well for Remeyer, who was received with applause. The man who never lost his calm in front of crowds was now using that calmness to the fullest extent after his traumatic accident.

Immediately after sharing his story, Remeyer was contacted by California Youth Services to join their team as a speaker to teens and parents of teens who harm themselves with drug and alcohol abuse.

“CYS heard about the success of Remeyer’s talk with the teens at Trabuco Hills High School assembly and reached out to me. Soon after that, other local high schools started to reach out as well!”

As a speaker working with CYS, Remeyer felt he had answered a calling that once again reignited his love and excitement for life—even through the struggles he faced on a daily basis.

“I feel like it’s why I was born. I love people and I love being able to serve them with a warning and to serve them as a beacon to make better decisions,” Reymeyer said.

“I see hungry, ambitious, and curious unexploited young minds in my audiences and they are hungry for life. They are also dealing with the same struggles I did.”

The Orange County local has also experienced the impact he’s had on parents and teens firsthand—even while shopping at grocery stores.

“I was shopping at Sprouts one time and a lady stopped me asking if my name was Byron and if I shared my story at her teenager’s high school and I responded with yes.

“She then said ‘I want to thank you. Because you shared your story, my daughter called me late one night to pick her and her friends up after they had been drinking.'”

Now, nine years since his accident, Remeyer’s process of recovery continues on top of speaking to at-risk youth.

“There are definite challenges as a result of the accident,” he said.

“There is being single, headaches, not being able to play music like I used to, and not being able to walk like others. Sometimes I feel like I look like a zombie from Michael Jackson’s ‘Thriller’ music video.”

But within Remeyer’s sobriety, he feels he’s gained an arsenal to continue forward amidst these struggles.

“I’m stronger, I’m wiser, more patient and thankful, and I’m at peace because I had to learn the hard way. There was so much I had missed growing up because of addiction and instant gratification.”

As Remeyer found his path in life through the biggest challenge he and his family has ever faced, he credits his sustainability through his faith in God.

“My faith is my foundation. For me, the scars have all been worth it.”