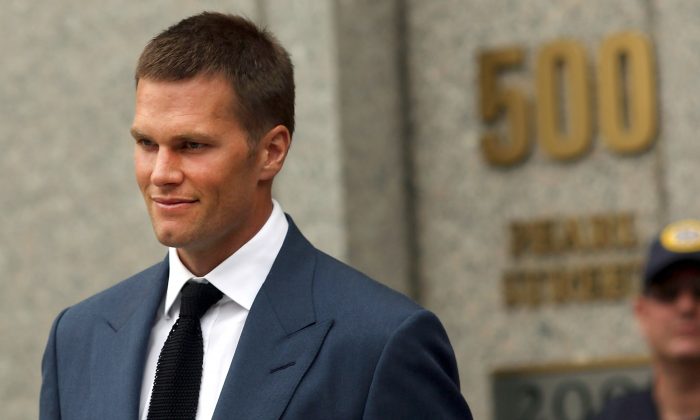 Tom Brady made as many headlines for winning the Super Bowl as he did for his alleged role in the deflategate scandal in 2015. (Spencer Platt/Getty Images)
Entertainment News

After ESPN Expose of Patriots, Team Issues a Statement: ‘Unsubstantiated’ and ‘Highly Exaggerated’

A report from ESPN claims that New England Patriots owner Robert Kraft, quarterback Tom Brady, and coach Bill Belichick—who have won five Super Bowls in the past two decades—are having a falling out.

After the report, the Patriots issued a statement, saying: “For the past 18 years, the three of us have enjoyed a very good and productive working relationship. In recent days, there have been multiple media reports that have speculated theories that are unsubstantiated, highly exaggerated or flat out inaccurate,” ESPN reported.

“The three of us share a common goal. We look forward to the enormous challenge of competing in the postseason and the opportunity to work together in the future, just as we have for the past 18 years. It is unfortunate that there is even a need for us to respond to these fallacies. As our actions have shown, we stand united,” their statement said.

But in the ESPN report, it alleges that the three men are embroiled in feuds in the practice facility. The ESPN report is allegedly based on more than a dozen interviews with Patriots staffers, players, and others.

Among other allegations, the ESPN report says that new players “often address” Brady as “sir,” and it states that he gets angry when he’s not named “Patriot of the week.”

The piece also focuses on the rift over Brady’s personal health coach and business partner, Alex Guerrero, who Belichick banned from the sidelines of games.

Don Yee, who is the agent for both Brady and former Patriots quarterback Jimmy Garoppolo, told ESPN: “I don’t really know what to say; it’s tough to have a response since it didn’t appear to me to have one on-the-record quote.”

“All I can suggest is don’t believe everything you read.”

In the ESPN expose, Belichick wanted to make Garoppolo Brady’s successor before he was traded this season to the San Francisco 49ers. The report said he traded Garoppolo to please Brady and then select another quarterback during the upcoming NFL draft. Garoppolo has gone 5-0 as a starter for the 49ers since he was traded.

ESPN claimed staffers were “stunned” by the Gradoppolo trade. Brady seemed in a better mood following the update, it said.

“Brady was once again the team’s present and future,” ESPN’s Seth Wickersham wrote in the piece. “His new backup, Brian Hoyer, was a longtime friend and not a threat. The owner was in Brady’s corner. ‘He won,’ a Patriots staffer says.”