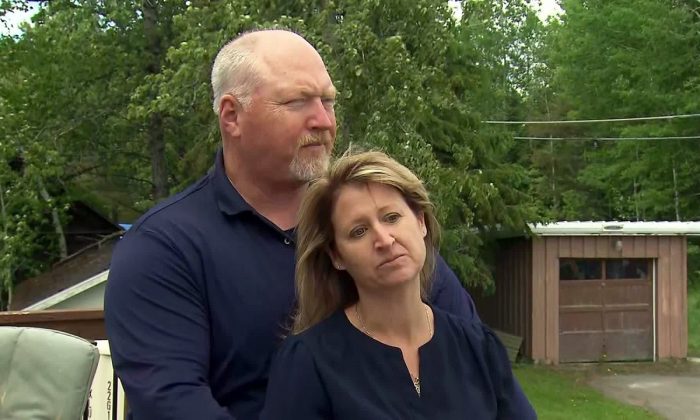 Tina Hammell, 49, and her husband, John, said they went to a resort in the Grand Bahia chain, Grand Bahia Principe Punta Cana in 2016. (David Allbritton/CNN)
Americas

After Deaths, More Tourists to Dominican Republic Say They Were Stricken With Illness

Their island getaways went bad in ways that sound similar: crippling stomach cramps, explosive diarrhea and malaise that lasted after they returned home.

But in some ways, they consider themselves lucky. They survived their trips to the Dominican Republic.

As reports of American tourists dying in the country continue to grab headlines, some travelers who fell violently ill tell CNN they wonder whether they may have escaped a worse fate.

More than a dozen reached out to Kaylynn Knull and Tom Schwander, a Colorado couple who were the focus of a CNN story this month, to share their accounts of being sickened. CNN interviewed most of them. Their experiences ranged from what they felt was most likely food poisoning or a virus to what seemed to be dire reactions to chemical contaminants.

Kaylynn Knull, 29, and her boyfriend Tom Schwander, 33, filed a lawsuit earlier this year against the owners of the resort, blaming them for causing their sickness in June 2018. https://t.co/hywXPYbP2F

Like the Colorado couple, several travelers said they smelled a strange, intense chemical odor in their hotel rooms before getting sick. Knull and Schwander said they were nauseous, drooling uncontrollably, sweating, teary-eyed and experiencing stomach cramps. Their sickness continued for days after they returned home. Their U.S. doctors suspected possible poisoning by a compound found in insecticide, and the couple is now suing the owners of the resort.

Of course, travelers get sick all the time, and it’s still not clear whether the deaths or sicknesses are connected. The FBI is assisting with toxicology testing in at least three of the recent American deaths. The bureau is analyzing samples from at least one deceased couple’s minibar, according to a Dominican Republic Ministry of Health spokesman.

Dominican officials have called the deaths isolated and have stressed that the country is safe.

‘You’re Not Going To Die,’ He Told Her

Tina Hammell, from northeastern Ontario, said she was in tears as she read about Knull and her boyfriend.

Hammell, 49, and her husband, John, said they went to a resort in the Grand Bahia chain, Grand Bahia Principe Punta Cana, in 2016. They were looking forward to the trip—a celebration of a successful sales season at a Yamaha dealership they run. On the second day of their trip, they retired to their room for a nap. Tina said she woke under the air conditioning unit in their room. “My throat and nose were on fire,” she recalled. “It smelled like paint.”

“She jumped up and ran outside, coughing and hacking,” John said. He was also overwhelmed. “It stung bad.”

They called the front desk and a worker showed up to their room, they said, and sprayed what seemed to be a disinfectant. The Hammells demanded another room and there got a decent night’s sleep. The next morning, Tina was in bad shape. She was nauseated and covered in sweat, had lost her voice and was increasingly struggling to breathe. The couple tried to take a walk, but she couldn’t muster the strength. Chest pains set in.

John and Tina went to the medical office on the property. It was closed, they said. They tried to eat and get some sleep. The following day, Tina was worse. John called for help from their room, demanding that management find a way to take them to another section of the sprawling resort where there was another medical facility.

John broke down as he remembered watching helplessly as his wife’s body began convulsing. She buckled into a fetal position and her hands twisted with muscle spasms.

At the medical center, a doctor managed to revive Tina, John Hammell said, at one point using a defibrillator.

She was transferred to a hospital where she stayed for at least four days and doctors found lesions on her lungs, medical records show. They checked out only because they couldn’t miss their flight home, John Hammell said.

Back in Ontario, the couple said, Tina saw doctors who told her that the Dominican Republic physician might have saved her life. But they couldn’t figure out what caused her symptoms.

“‘You’ve been poisoned,'” John Hammell recalled physicians saying to his wife, “‘but we don’t know from what.'”

Three years later, the couple says, doctors are treating her for lung and heart problems she said she did not have before her trip to the Dominican Republic, though doctors haven’t been able to say for sure what the cause is.

“I had no idea there were other people,” she told CNN, weeping.

Hammell has read news in the past month about some of the US tourists who have died or fallen ill. Those include some who stayed at the same resort, such as 51-year-old Yvette Monique Sport of Pennsylvania, whose sister, Felecia Nieves, told CNN that Sport died at the Punta Cana facility in June 2018.

Nieves said her sister had drinks, including a beverage from the minibar, then took a shower and went to bed. Her fiancé found her dead the next day.

A year after Sport’s death, her sister said the family still has not been given results of a toxicology test.

Alba Mingo, the head of trade marketing at Bahia Principe Hotels & Resorts, declined to comment on specific cases, citing the company’s cooperation with authorities in the ongoing inquiry into the incidents.

Mingo said the chain’s health and safety policies include “sanitation and disinfectant efforts, strict quality standards for the food and beverage items we serve to our guests and an action plan to respond to any reported cases of illness. … We regularly audit all hotels in respect to health and safety and consistently receive high certification scores for hygiene.”

‘I Will Never Go Back There’

Elsewhere in Punta Cana, Jake Spruill of Virginia told CNN that he and his family had a terrible vacation at the Majestic Elegance resort in 2017. He, too, described an overwhelming chemical smell in his room.

He and his wife plus two family members and their spouses went to the Dominican Republic to celebrate Spruill’s 40th birthday.

When he and his wife opened their room, they were hit by “an incredibly, overpowering smell that I would consider a chemical smell.”

His throat and nose felt mildly irritated, he said. They complained to management. “The response was ‘We cannot move you. I’m sorry, we can’t move you,'” Spruill said.

The couple left to spend time in the resort. When they returned, it smelled like someone had sprayed air freshener to cover the chemical smell. It didn’t work.

“We decided to avoid the room at all costs,” and try to let the air conditioner run, Spruill said. He and his family members “felt a little off.” They were drinking, sure, trying to have a good time. But something didn’t feel right, he said. His wife started to have gastrointestinal distress. His eyes burned and watered.

Spruill’s brother-in-law, Richard Brumfield, said when he went to his room he noticed a smell.

“It was almost like adhesive,” he said. “It was extremely noxious.”

Brumfield said that when he complained about the chemical smell, the hotel staff put scented candles in his room, which did nothing to help.

He and Spruill said that they drank a shot of Patron at the resort that did not taste like Patron, and both suspect the alcohol was adulterated.

Neither went to the doctor or ever received a diagnosis. When they got home, they didn’t communicate with the resort.

“I will never go back there,” Spruill said.

In a written response, Ricardo Espinosa, vice president of sales and marketing for Majestic Elegance, told CNN that “all the bottles used in our hotels, both in our bars and our minibars, are genuine and unadulterated.”

Espinosa did not address the smell the men described, but he stressed Majestic Resorts’ emphasize hospitality and noted that the hotel has “a very good reputation and image.”

Those who came back from vacation to weeks of sickness have had new context for their experience since news of American deaths started to emerge a few weeks ago.

As of last week, Joseph Allen of New Jersey, 55, became at least the ninth U.S. tourist in a little more than a year to die at a Dominican Republic resort, his family said. The cause of his death is unclear.

Leyla Cox, 53, died June 10 in her room at Excellence Resorts in Punta Cana, according to the hotel. A statement from the resort, citing a forensics report, said she suffered a heart attack, but CNN has not independently verified that.

Another American has died while visiting the Dominican Republic: 53-year-old Leyla Cox was celebrating her birthday when she died of a heart attack, US officials say.

At least 6 other Americans have died on the island since January.

Other deaths include Nathaniel Holmes, 63, and Cynthia Day, 49, who were found dead May 30 at Bahia Principe La Romana. Dominican authorities said both suffered internal bleeding, including in their pancreases, and that Holmes had an enlarged heart and cirrhosis of the liver. Day, authorities said, had fluid in her brain. Toxicology reports are pending, and an investigation is underway into the deaths.

A memorial service is being held for a Maryland woman who died while on vacation in the Dominican Republic. Cynthia Day was staying at a Dominican Republic resort with her fiancé Edward Nathaniel Holmes when both reportedly died of respiratory failure. https://t.co/PJ4OFjKVeC pic.twitter.com/zoKhpu2vhA

Days earlier, Miranda Schaup-Werner died at the same resort. She had a drink from the minibar, felt ill and sometime later collapsed and died. A preliminary autopsy cited by the Dominican Republic’s Attorney General’s Office said she suffered a heart attack, pulmonary edema, and respiratory failure. Her death is also under investigation.

Overall, a U.S. State Department official said, “We have not seen an uptick in the number of U.S. citizen deaths reported to the Department” in the Dominican Republic. The State Department said it is closely monitoring investigations, and that the FBI has said toxicology testing could take up to 30 days.

The department has a standing travel advisory for the Dominican Republic due to crime, but it has not issued an alert related to the resort deaths.