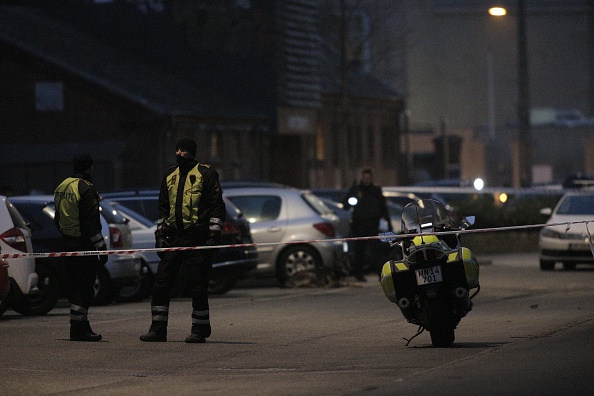 Policemen secure the area around a building in Copenhagen, Denmark, where shots were fired on February 14, 2015 outside the venue of a debate held on Islam and free speech. According to Danish media, the French ambassador to Denmark attended the discussion. Unidentified assailants fired on a building where the debate was being held, the French ambassdor to Denmark told AFP from inside the venue. Reports said that Swedish artist Lars Vilks, the author of controversial Prophet Mohammed cartoons published in 2007 that sparked worldwide protests, was also at the debate. AFP PHOTO / MARTIN SYLVEST / SCANPIX DENMARK +++ DENMARK OUT (Photo credit should read MARTIN SYLVEST/AFP/Getty Images)
Europe

After Copenhagen Shooting, ‘Free speech must be protected’

A free speech and anti-censorship group said that in the wake of the shooting attack that left one person dead at a cafe in Copenhagen, Denmark, “free speech must be protected.”

Jodie Ginsberg, who is the chief executive of Index on Censorship, condemned the attack on Saturday.

Her statement reads: “The use of violence on a gathering exploring the intersection of religious and artistic freedom should send shivers down our spines. The Charlie Hebdo murders inspired intensified public debate about free speech and its value. Many people who had previously given little thought to free speech were drawn for the first time into online discussions or attended events to help them get a better understanding of the issues. It would be terrible if violent acts such as that in Copenhagen shut down free speech even further.”

“The ability to express ourselves freely, to attend meetings and debates without fear of violence, is fundamental to a free society. Free speech must be protected. This is not just about cartoons or offence. If violence is allowed to win, free speech – and all of our ability to be who we are, practice what religion we like, have relationships with whomever we want – dies.”

The shooting appears to have been targeted at artist Lars Vilks, who has portrayed the Prophet Mohammed in the past and incensed Muslims. He has been threatened repeatedly over the drawings.

Danish police say they now believe there was only one shooter in the attack that also left three police officers wounded during a free speech event.

After initially searching for two suspected gunmen, Copenhagen police said Saturday that “preliminary interviews indicate there was only one perpetrator.” Denmark’s security service called the shooting “a likely terror attack.”

Police released a blurred photograph of the suspect wearing dark clothes and a scarf covering part of his face.

Vilks  organized and attended Saturday’s event but was not hit by gunfire, police said.

“I saw a masked man running past,” said Helle Merete Brix, one of the event’s organizers. “I clearly consider this as an attack on Lars Vilks.”

She and Vilks were quickly ushered away by the security detail that accompanies the artist whenever he is in Denmark.

There was no immediate claim of responsibility for the shooting, which took place shortly before 4 p.m. (1500 GMT, 10 a.m. EST). Denmark’s security service, PET, said the circumstances surrounding the shooting “indicate that we are talking about a terror attack.”