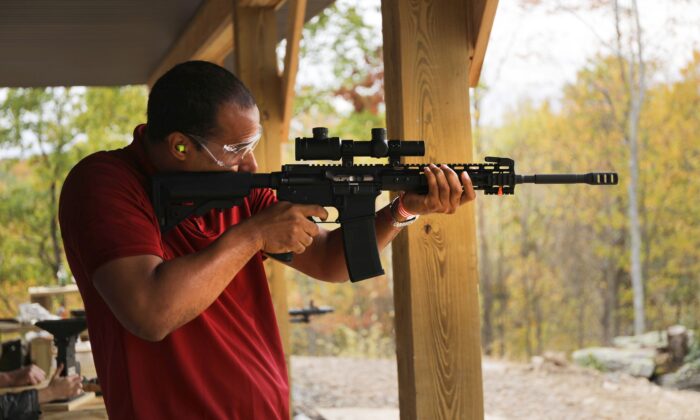 A man shoots an AR-15-style rifle at a shooting range during the “Rod of Iron Freedom Festival” in Greeley, Pennsylvania, on Oct. 12, 2019. (Spencer Platt/Getty Images)
US News

After a major drop in gun sales following the election of President Donald Trump, sales have picked up again in recent months, according to the National Shooting Sports Foundation (NSSF), a firearms trade industry association.

Nearly 4.8 million firearms were sold between May and October, an increase of roughly 6 percent from 4.5 million in the year-earlier period.

The trend appears to have accelerated in September and October, when sales rose 15 and 10 percent, respectively, from the same months a year ago.

The boost in sales follows a major slowdown that started in December 2016 following the election of Trump.

The numbers are based on the NSSF’s analysis of data from the FBI’s National Instant Criminal Background Check (NICS) system.

“While not a direct correlation to firearms sales, the NSSF-adjusted NICS data provides a more accurate picture of current market conditions,” the foundation stated in a footnote to the data.

“With the prospect of relaxed gun laws for the next four years, demand has diminished and gun sales in the U.S. have waned,” The DataFace, a San Francisco data analysis company, reported in 2018.

While it’s not clear why exactly the sales started to pick up again in May, it could be that some people were spooked by Trump’s ban on bump stocks, devices that allow semi-automatic rifles to fire almost as rapidly as automatic weapons. At least some gun rights advocates opposed the ban.

In early August, shootings in Dayton, Ohio, and in El Paso, Texas, left a combined 32 people dead and 51 injured.

Mass shootings are usually followed by an increase in gun sales, due to buyers’ safety concerns or because people expect a backlash to ownership from gun control advocates.

O’Rourke, whose hometown is El Paso, escalated his rhetoric after the shootings and proposed a mandatory buyback.

“I was asked how I’d address people’s fears that we will take away their assault rifles,” he said in a Sept. 2 tweet. “I want to be clear: That’s exactly what we’re going to do. Americans who own AR-15s and AK-47s will have to sell their assault weapons. All of them.”

Despite being the most popular guns sold today, rifles have been involved in less than 3 percent of gun homicides in 2018, based on data most police agencies provide to the FBI. While 297 deaths were attributed to rifles in 2018, more than 1,500 have been slashed or stabbed to death, 443 have been killed with a blunt object, such as a club or a hammer, and 672 have been beaten to death without weapons or objects.

Most Democratic presidential contenders support adding at least some firearm restrictions and all support an “assault weapons ban,” according to an August article by The Washington Free Beacon.

O’Rourke’s comments seem to have received most media coverage. The National Rifle Association, the nation’s largest gun-rights advocacy group, informally labeled him the “AR-15 salesman of the month” in a September tweet.