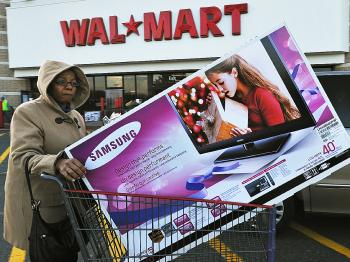 Holiday shoppers will be buying up large on the day after Christmas. Big retailers like Wal-Mart will be hoping that pockets are deep. (Paul J. Richards/AFP/Getty Images )
Business & Economy

After Christmas Sales, a Big Push for Retailers

Ian Ritz
View profile
Follow
biggersmaller
Print
Upcoming after-Christmas sales are being announced to the public as the Christmas holiday is celebrated throughout the world.

Many companies are revealing after-Christmas sale prices earlier in an attempt to draw as many shoppers as possible.

One of the biggest companies to advertise their sales sooner than expected is corporate giant Wal-Mart, which posted some of its prices days before other companies.

Wal-Mart has a multitude of products for prices that are significantly lower than years past. Offers include a reduced-price selection of laptop computers and other electronic devices such as the Microsoft Xbox 360 and Sony Playstation 3.

Amazon.com is also expected to shave its prices on a wide range of products. Part of deals offered will include free shipping on select items during their Christmas shopping campaign.

Kohl’s is looking to attract shoppers with lowered prices on its massive stock of jewelry and kitchen appliances.

Best Buy will offer discounts on the majority of its high-definition televisions and will be competing with Wal-Mart for lowered prices on Xbox 360 and Playstation 3.

There are a multitude of consumer guides which are updating their websites frequently to keep fresh information available for those who are hoping to capitalize on sale opportunities.

For more information and constant updates visit sites such as Dealsoutlet.net, Slickdeal.net and Dealnews.com.