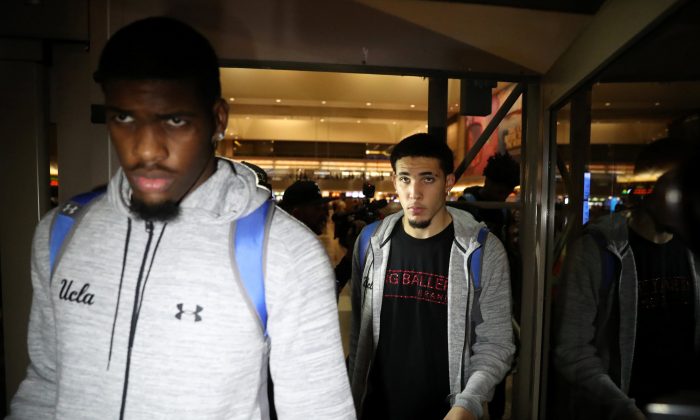 Outspoken NBA father LaVar Ball has reportedly removed his son, LiAngelo, from UCLA, according to reports.

The news was first broken by TMZ on Monday. LaVar later confirmed the news to ESPN.

LiAngelo Ball is one of three UCLA basketball players that were detained in China over alleged shoplifting. UCLA indefinitely suspended the three.

In China, LiAngelo was placed under house arrest, but after President Donald Trump spoke up for him during his visit to China, he was released along with two of his teammates. The charges were eventually dropped.

TMZ reported that the freshman, who hadn’t played a single game yet for UCLA, hasn’t been officially withdrawn from the school but he’s at home and won’t return.

LiAngelo along with Jalen Hill and Cody Riley thanked President Trump last month at a press conference after a little prompting from the president.

Do you think the three UCLA Basketball Players will say thank you President Trump? They were headed for 10 years in jail!

“To President Trump and the United States government, thank you for taking the time to intervene on our behalf,” freshman Riley said, reported USA Today. “We really appreciate you helping us out.”

“I would like to thank everyone involved in this whole ordeal,” Hill noted. “Thank you to the police department, which treated us very well. Thank you to the Pac-12 and the whole UCLA community that helped us the whole way. And thank you to the United States government and President Trump for your efforts to bring us home.”

“I would also like to thank President Trump and the United States government for the help they provided, as well,” LiAngelo Ball said.

UCLA basketball players detained for shoplifting in China thank Pres. Trump for his help in bringing them home: "We really appreciate you helping us out." https://t.co/YdBGH65S4m pic.twitter.com/AmkGkIG2kC

Last month, LaVar Ball downplayed Trump’s role in his son’s release. Trump responded saying that maybe he “should have left them in jail.”

Trump’s social media director, Dan Scavino, tweeted that LiAngelo “would be in China for a long, long, long time” without Trump’s help.