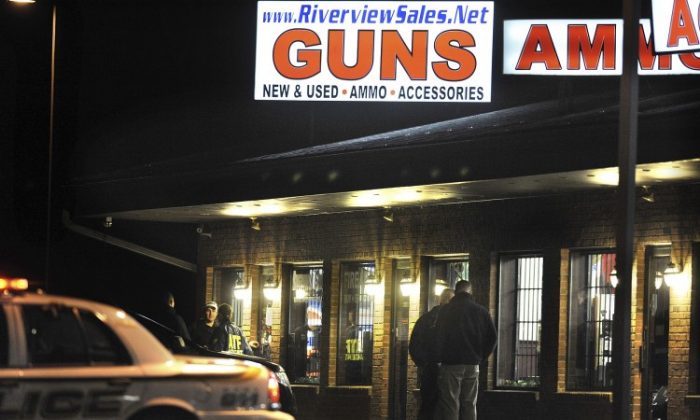 In this Dec. 20, 2012 photo, law enforcement officials stand outside Riverview Gun Sales, as authorities raid the store in East Windsor, Conn. The shop, which sold a gun to Nancy Lanza, mother of Newtown school shooter Adam Lanza, had its federal firearms license revoked by the Bureau of Alcohol, Tobacco, Firearms and Explosives. (AP Photo/Jessica Hill)
US

WASHINGTON— This week’s slaughter of nine people in a South Carolina church left prospects that Congress will curb guns right where they’ve been for years — remote for now, according to lawmakers and activists on both sides of the issue.

Conceding that congressional action was unlikely soon, President Barack Obama said lawmakers will tighten federal firearms restrictions when they believe the public is demanding it.

“I am not resigned,” Obama told the U.S. Conference of Mayors in San Francisco on Friday. “I have faith we will eventually do the right thing.”

If anything, the odds of congressional action seem slimmer with both the House and Senate dominated by Republicans, who traditionally have been less sympathetic to curbs on gun ownership. When the Senate rejected firearms constraints in 2013 prompted by Newtown, the chamber was led by Democrats.

“He couldn’t get it going after Sandy Hook with Democratic control” of the Senate, Erich Pratt, spokesman for Gun Owners of America, a gun rights group, said about Obama. “He won’t get it going with Republican control.”

Investigators were just starting to gather facts about Wednesday’s shooting at a historic black church in Charleston, South Carolina. Roof, 21, faced nine counts of murder, and the Justice Department said it was investigating whether to classify the attack as a hate crime or even domestic terrorism.

“The question remains how we keep guns out of the hands of those who shouldn’t have them without violating the constitutional rights of law-abiding Americans,” said Senate Judiciary Committee Chairman Chuck Grassley, R-Iowa. “There’s ample time to learn more about what happened and debate ways to prevent these kinds of senseless acts.”

Murphy and others blamed the potency of the National Rifle Association for Congress’ unwillingness to restrict firearms.

“Congress has failed to act because it’s filled with too many lapdogs for the gun lobby,” said Dan Gross, president of the Brady Campaign to Prevent Gun Violence.

NRA spokesman Andrew Arulanandam would not address whether the Charleston shootings would change lawmakers’ attitudes, saying, “As the NRA has done for decades, we will not comment until all the facts are known.”

In 2013, the Senate’s bipartisan attempt to require background checks of all firearms purchasers at gun shows and on the Internet failed by a 54-46 vote. That was six short of the 60 votes needed to break a Republican filibuster against the bill.

A similar measure never reached the floor of the GOP-controlled House.

“I’d like to say these shootings in Charleston will be a turning point, enough for Congress to fight back against the gun lobby and take some serious action about gun laws. But I don’t want to be naive,” said Chelsea Parsons, who oversees gun policy for the liberal Center for American Progress.

A check of the Congressional Record shows that while several legislators took to the House and Senate floors Thursday to express their sadness over the nine deaths in South Carolina and offer condolences, none called for federal legislation curbing firearms. The word “gun” was spoken seven times while “background checks,” ”gun control” and “firearms” were not uttered at all.

Congress was not in session Friday.