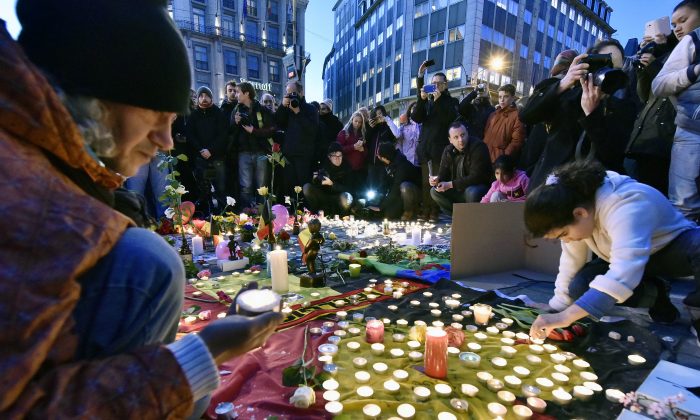 People bring flowers and candles to mourn for the victims at Place de la Bourse in the center of Brussels, Tuesday, March 22, 2016. Bombs exploded at the Brussels airport and one of the city's metro stations Tuesday, killing and wounding scores of people, as a European capital was again locked down amid heightened security threats. (AP Photo/Martin Meissner)
Politics

Republican presidential hopeful Sen. Ted Cruz says it is time for law enforcement to “patrol and secure Muslim neighborhoods before they become radicalized.”

The conservative Texas lawmaker made the comment in a statement his campaign released following Tuesday’s bombings in Brussels, Belgium, that killed at least 31 people and wounded dozens more. The statement was titled, “We Can No Longer Surrender to the Enemy Through Political Correctness.”

Cruz’s statement provided no details about how law enforcement would secure Muslim neighborhoods.

Cruz said the U.S. must help its European allies and forbid refugees from countries with significant numbers of al-Qaida or IS extremists. He said it must secure the border with Mexico and “utterly destroy ISIS,” another acronym for the group.

Today radical Islamic terrorists targeted the men and women of Brussels as they went to work on a spring morning. In a series of coordinated attacks they murdered and maimed dozens of innocent commuters at subway stations and travelers at the airport. For the terrorists, the identities of the victims were irrelevant. They—we—are all part of an intolerable culture that they have vowed to destroy.

For years, the west has tried to deny this enemy exists out of a combination of political correctness and fear.  We can no longer afford either. Our European allies are now seeing what comes of a toxic mix of migrants who have been infiltrated by terrorists and isolated, radical Muslim neighborhoods.

We will do what we can to help them fight this scourge, and redouble our efforts to make sure it does not happen here. We need to immediately halt the flow of refugees from countries with a significant al Qaida or ISIS presence. We need to empower law enforcement to patrol and secure Muslim neighborhoods before they become radicalized.

We need to secure the southern border to prevent terrorist infiltration. And we need to execute a coherent campaign to utterly destroy ISIS. The days of the United States voluntarily surrendering to the enemy to show how progressive and enlightened we can be are at an end. Our country is at stake.