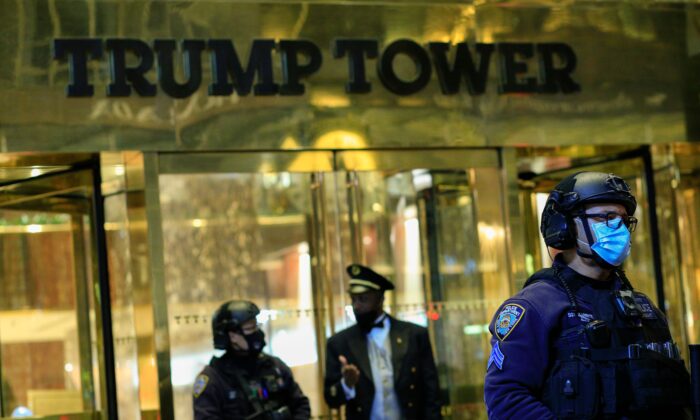 After Biden Swearing In, NYPD Reevaluating Security at Trump Tower

“From now through the inauguration we will have a robust presence at Trump affiliated locations included Trump Tower on 5th Avenue,” the New York Police Department (NYPD) told news outlets in a statement before the inauguration.

“After the inauguration we will reevaluate our security posture,” the agency added.

NYPD officers helped guard Trump Tower since Trump won the 2016 election. Trump made the tower his campaign and transition offices for a period of time, taking meetings there. Security for the 75 days from Election Day to Inauguration Day hit $24 million, according to the police department. Lawmakers estimated New York City would spend $127,000 to $146,000 a day for the NYPD and $4.5 million annually for firefighters.

Fifth Avenue near the tower included security measures like checkpoints for a while, and the Federal Aviation Administration ordered a no-fly zone over it until Trump was inaugurated. The tower, rising 58 stories, was erected in 1983.

The street became home to a large “Black Lives Matter” mural in the summer of 2020, on the orders of New York City Mayor Bill de Blasio, a Democrat.

Trump left Washington on Wednesday morning for Florida, where he shifted his residency from New York in 2019. Biden was inaugurated around noon.