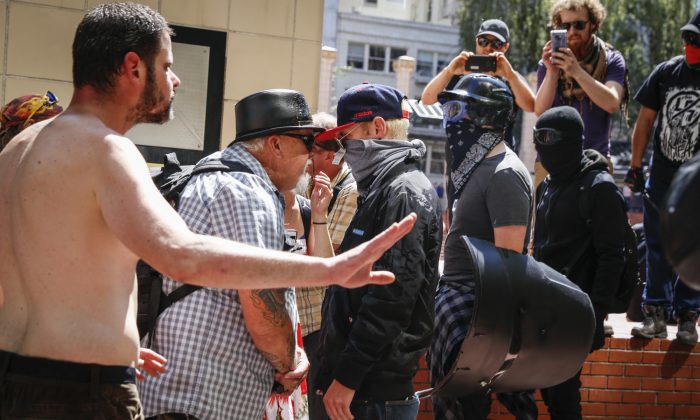 A man who was later assaulted by Antifa, second from left, faces off with Rose City Antifa members at Pioneer Courthouse Square in Portland, Ore., on June 29, 2019. (Moriah Ratner/Getty Images)
US News

After the Antifa extremist group was caught on video assaulting at least three people over the weekend in Portland, Oregon, the police chief there called for a law that would ban masks.

Antifa, a far-left group that openly advocates violence, was seen on June 30 beating journalist Andy Ngo as well as two other men. Ngo said he suffered a brain hemorrhage. Three people were arrested and five suspects are being sought.

Antifa appeared in Portland to protest against Proud Boys and #HimToo, groups advocating free speech, men’s rights, and other principles, which reportedly obtained permits for their events.

“We have to do something differently,” Portland police Chief Danielle Outlaw said on July 3, speaking to reporters for the first time since the beatings, reported the left-leaning Oregonian. Neither Outlaw nor the Oregonian mentioned Antifa by name.

“There were entities that planned a brawl in the city of Portland and no one seems to be upset about that. … Entities came here for a fight. … I don’t even know what they were protesting against,” Outlaw added.

Outlaw said that Mayor Ted Wheeler, who is also the city’s police commissioner, didn’t order police officers to stand down despite allegations by the police union president and Ngo that officers stood by while the violence was waged. In video footage that shows Ngo and the two men being assaulted, no police officers were visible during the assaults.

Outlaw said the bureau has 128 positions for officers, and noted law enforcement from nearby agencies, such as the Clackamas County Sheriff’s Office, have declined requests to enter the city and assist officers in dealing with the frequent clashes between Antifa and groups like the Proud Boys.

Acknowledging police have to pick and choose when to intervene, Outlaw said officers intervene in teams “whenever we can do it safely.”

She then called for the law against masks.

“We cannot allow people to continue to use the guise of free speech to commit a crime,’’ Outlaw said. “A lot of people are emboldened because they know they can’t be identified.’’

A number of Antifa members have said one reason they wear masks is to avoid being identified.

Fifteen states ban masks, including Alabama, Mississippi, and New York. A bill proposed in the U.S. House of Representatives in 2018 would have criminalized “committing certain offenses while in disguise.”

Anyone wearing a mask who injured, threatened, intimidated, or oppressed people “in the free exercise or enjoyment of any right or privilege” would have been imprisoned for up to 15 years if the bill had passed.

The bill was titled the “Unmasking Antifa Act of 2018.” It was never brought to a vote.

Reacting to Outlaw’s comments, Kimberly McCullough, policy director for the American Civil Liberties Union of Oregon, said that an anti-mask law in the state might violate the First Amendment.

“I don’t know that we could ever overcome the First Amendment implications here,” she told the openly left Willamette Week. “We would be chilling all sorts of legitimate uses of masks. I don’t think you can overcome that by saying it’s going to work really well.”

Ngo, the journalist who was assaulted, has called for some kind of action by Portland.

“How many more people have to be beaten and attacked in the city of Portland before things change?” Ngo told the openly left CNN. “I am by far not the first one. There’s been many other incidents that have happened since 2016 and the policing has remained the same, which is a policy of not engaging with militant protesters.”

Violence is utilized by Antifa because “they believe that elites are controlling the government and the media. So they need to make a statement head-on against the people who they regard as racist,” Scott Crow, a former Antifa organizer, told CNN.

Brian Levin, director of the Center for the Study of Hate and Extremism at California State University–San Bernardino, said that the group is trying to become better known in part through violence.

“What they’re trying to do now is not only become prominent through violence at these high-profile rallies,” he said, “but also to reach out through small meetings and through social networking to cultivate disenfranchised progressives who heretofore were peaceful.”