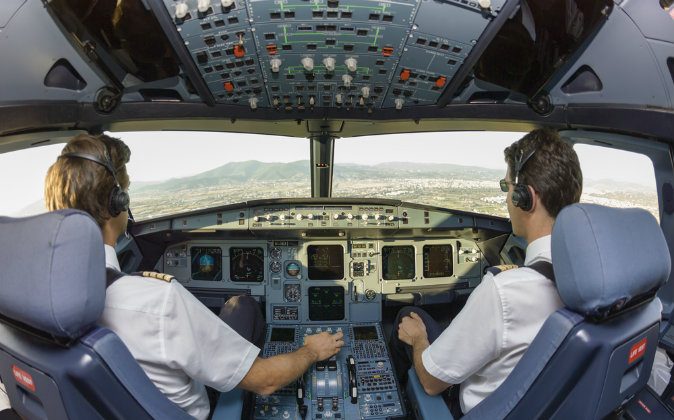 Pilots in an airplane cockpit via Shutterstock*
US

After Alps Crash, Some Experts Ponder Flights Without Pilots

That radical idea is decades away, if it ever becomes a reality. But following the intentional crashing of Germanwings Flight 9525 by the co-pilot, a long-running debate over autonomous jets is resurfacing. At the very least, some have suggested allowing authorities on the ground to take control of a plane if there is a rogue pilot in the cockpit.

The head of Germany’s air traffic control agency on Wednesday became the latest to raise such a prospect.

Such moves might seem logical in the aftermath of this crash, but industry experts warn that the technology is fraught with problems. Besides, no matter how tragic the deaths of the 149 other passengers and crew were, it was an anomaly. Each year, more than 3 billion people around the globe step aboard some 34 million flights. The number of crashes purposely caused by commercial pilots in the last three decades: fewer than 10.

“Would this really be the wisest investment of our air safety dollars?” asks Patrick Smith, a commercial airline pilot for 25 years and author of “Cockpit Confidential.”

Smith says that even the newest jets would need an expensive reengineering of their key systems. And that doesn’t even tackle any of the concerns over terrorists hacking into the communications link and taking over the jet.

Despite those major technical — and psychological — hurdles, the concept isn’t so farfetched.

There was a time when riding an elevator without an operator seemed unimaginable. Today, we don’t think twice about stepping into an empty elevator. Airports around the world have trams without drivers, as do some subways systems. Even cars are starting to take some of that control away from us: the latest models will automatically brake if there is a sudden hazard.

The military already has pilots remotely flying drones that are on the other side of the earth. But making that jump for passenger jets is simply unnerving.

Planes don’t operate in the confined space of an elevator shaft or train tracks. And flying has always seemed unnatural. When jets make odd noises or hit a rough patch of turbulence, we eagerly wait for that soothing voice of the pilot to tell us that everything is ok.

“The real reason a person wants another human in the cockpit is because they want to believe there’s somebody in the front who shares their own fate and thus if anything goes wrong, they will do everything they can to save their own lives,” says Mary Cummings, a former U.S. Navy fighter pilot who is now a Duke University professor studying autonomous flight.

That’s why Cummings and other aviation experts see cargo planes being the first aircraft to fly over the U.S. without pilots. First, the big cargo companies would go from two pilots to one with a team of pilots remotely assisting from the ground. Then all operations would shift to the ground.

Airlines would save on pilot training, salaries, retirement costs and hotel and travel expenses. Plus, ground-based pilots would be able to hand off flights from one to another, allowing them to work normal eight hour shifts even if their jet is in the air for 12 hours.

Cummings says such a shift could occur in 10 or 15 years.

Pilots are getting further and further removed from their aircraft.

In the past, pilots would pull back on the yoke which was connected to a cable that ran the length of the plane. That cable would move flaps on the tail called elevators, causing the plane to climb. Today, there is no cable. When the pilot moves the yoke a computer sends a signal to the rear of the plane, moving the elevators.

The majority of aircraft maneuvers outside of takeoff and landing are already automated. Even when a pilot wants to change course, they program the new directions into the plane’s computer instead of making the turns themselves.

If that weren’t removed enough, Airbus is exploring a windowless cockpit. The aircraft manufacturer is experimenting with a system of cameras and screens that would give pilots a wider, more-detailed view, although one step removed from reality.

Todd Humphreys, a University of Texas professor of aerospace engineering, says it isn’t hard to go one step further and have the pilots watching those same screens from a room on the ground.

“Anything you can control with knobs or buttons, without getting out of your seat, can be done equally well — or even better — on the ground,” Humphreys says.

Humphreys argues that ground-based pilots wouldn’t have to deal with time zone changes and jetlag, uncomfortable airport hotels or even the dehydration that comes after long flights.

Since most flights don’t have a problem, “pilots only face extreme challenges once in a blue moon,” Humphreys says, and might not be most apt to handle an emergency. Instead, he says you could have a team of specialized experts in the room with all the remote pilots who could jump in and assist with any emergency, actually reducing the amount of pilot error.

Pilots mostly disagree with that, saying they need to make split-second decisions. Take US Airways Flight 1549 which famously landed on the Hudson River. Capt. Chesley “Sully” Sullenberger had seconds to decide what to after both engines were disabled by a bird strike. And how would pilot thousands of miles away handle a fire in the cockpit?

Ultimately, it will come down to passengers. Are travelers more worried about the rare rogue pilot killing them or stepping onto a plane without any pilot?

*Image of pilots in an airplane cockpit via Shutterstock