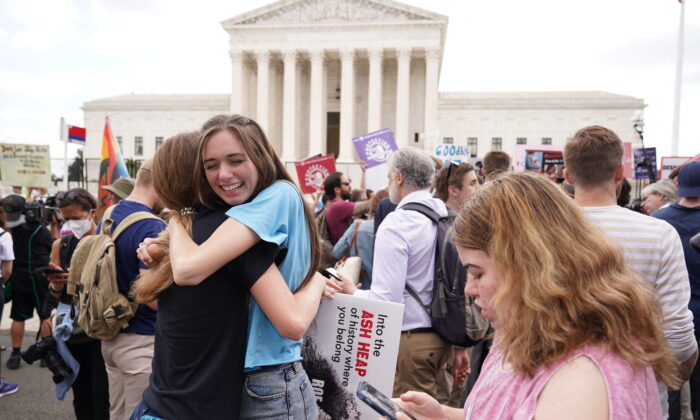 After a Rare Victory in the Culture Wars, Conservatives Can’t Quit Fighting

In that much under-appreciated Ang Lee film of 1998, “Ride With the Devil,” a melancholy Confederate irregular in the guerrilla conflict on the border between Missouri and “Bloody Kansas” during the Civil War explains why he thinks the South is bound to lose.

Citing the new schoolhouse in Lawrence, Kansas, built by Northern settlers even before the church, he says: “They rounded every pup up into that schoolhouse because they believe that everyone should have the same free-thinking ways they have. … That is why we shall lose. We don’t care what they think. We only care about ourselves.”

The point is that the Southerners only want to be left alone to go on doing what they’ve always done, whereas the aggressor Yankees (in their view) insist that everyone must think as they do about the evils of slavery. You can imagine the Confederates adapting the old pro-choice bumper-sticker to their own purposes: “If you’re opposed to slavery, then don’t own any slaves.”

And yet this particular Southern partisan in Ang Lee’s movie recognizes that what his side loses along with the moral advantage on the slavery question is the moral energy necessary to make his ideas prevail over those of the more highly motivated abolitionists.

I thought of his words when I read what Rod Dreher had to say about the Supreme Court’s decision in the case of Dobbs v. Jackson Women’s Health Organization.

“It is really something to think about,” he wrote, “how the Left today, post-Dobbs, is left to feel the same things that many of us on the Right have felt over and over again: defeat on an issue that is dear to us. They are not used to losing — not our ruling class. They are used to getting their way, and expecting the rest of us to fall in line and know our places.”

He then lists a number of the recent “woke” moral imperatives to which conservatives have been expected to knuckle under and which they might now want to reject along with the demand for no restrictions on abortion.

“What if they don’t want groomers to colonize the minds of their children in schools and in children’s entertainment?

“What if they’re sick and tired of all the propaganda from media and woke capitalism?

“What if they are fed up with unaccountable corporations dictating public policy to state legislatures?

“What if they just want to be left … alone?”

I can understand his feelings in just wanting to be left alone. It’s the perennial cry of the deep-seated libertarian tendency in the American national character. “Tain’t nobody’s biz- ness if I do,” sang Billie Holiday, a song to which every American bosom must have returned an echo.

But this was also the plea of the Southern slave owner.

Likewise, I’m not sure Dreher isn’t right to add, as he goes on to do, that “if we’re going to keep America together, we are going to have to lean heavily into federalism. Let Alabama be Alabama, and let California be California.”

That is, by letting each state decide for itself what restrictions to place on abortion, if any.

Always assuming, of course, that this is all right with “those people.”

All the same, the victory for the pro-life cause represented by Dobbs could hardly have happened without the moral advantage—which I’m very far from being the first to compare to that of the 19th-century abolitionists—naturally accruing to those who champion the cause of innocent life against those who would destroy (or enslave) it at will.

In this case, it was the Democrat and libertarian pro-aborts who just wanted to be left alone by their officiously moralizing neighbors—which in retrospect appears to be the reason why they, too, were bound to lose. Eventually.

Maybe it’s not enough for us to say to the left that, after they’ve been taught a lesson by the Dobbs decision, they’re now expected just to leave us alone.

Maybe we have to remain on the moral offensive against woke-ism by making the moral case for tradition and patriotism and against “gender” ideology and racial grievance better than we’ve done hitherto?

It’s a bit of a terrifying thought, I readily admit. So used are we all to assuming the moral superiority of the “woke,” even in their reverse racism and sexual libertinism, that it’s almost as if we can imagine no other counter to them than the pathetic plea to be left alone—alone with the shame of our sexism and racism and transphobia, and who knows what all else, firmly fastened onto us by those who hate us for not thinking as they do.

Small wonder if the inevitably opportunistic young minds of the rising generation can see little alternative but to go “woke” themselves.

Rod Dreher is famous for espousing “the Benedictine option” of conservative retreat into a semi-cloistered existence apart from counter-cultural fashion and society.

It’s another way of saying that we want to be left alone to go our own way, independent of the faddish left.

But to adapt Trotsky, we may not be interested in the woke but the woke are still interested in us. I’m afraid that we who continue to reject their neo-Marxist morality can have little chance against them, ultimately, unless we’re willing to make a moral case of our own that will stand up to and eventually prevail against theirs.