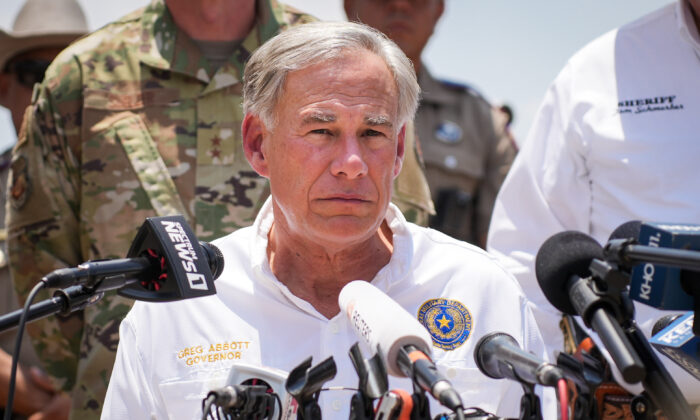 After 53 Die in Smuggling Tragedy, Texas Governor to Start Truck Checkpoints on Highways

EAGLE PASS, Texas—The Texas Department of Public Safety (DPS) will be setting up random highway checkpoints to inspect trucks following the deaths of 53 illegal immigrants who were being smuggled in the back of a tractor-trailer earlier this week.

“We’ve seen increased brazenness by cartels that feel empowered, because we do not have a federal government that’s pushing back against those cartels and their illegal activity,” Gov. Greg Abbott said at a June 29 press conference in Eagle Pass, one of the busiest regions for illegal border crossings in the country.

“And of course, the worst thing of all is the catastrophic death that we have witnessed.”

DPS Director Steven McCraw said state troopers will assist civilian inspectors in setting up checkpoints along the main highways running from the Texas–Mexico border to San Antonio, Houston, and other major hubs.

Often, illegal aliens wade or are rafted across the Rio Grande into Texas and, while avoiding Border Patrol, are taken to stash houses to await vehicle transport further into the United States.

McCraw said he also plans to deploy DPS special agents to identify stash houses near the border, “which is very important to disrupting Mexican cartel operations.”

The truck that was carrying the illegal immigrants who died in San Antonio passed through a Border Patrol highway checkpoint 30 miles north of Laredo on Interstate Highway 35, McCraw told The Epoch Times.

Tom Homan, the former chief of Immigration and Customs Enforcement, told The Epoch Times that smugglers will turn off the freezer unit in refrigerated trucks to give the appearance that it’s an empty trailer and that there’s no need for a secondary inspection.

The refrigeration was turned off in the truck in San Antonio and there was no water inside, even as the mercury topped 100 degrees.

“Many of these deaths could be prevented if Biden simply fully funded the Border Patrol operation of the United States of America and implemented the policies that the Border Patrol needs in order to do their real job. And the real job is not the paper processing work that they’ve been assigned to do.”

President Joe Biden called the deaths in San Antonio “horrifying and heartbreaking,” and he vowed to crack down on the criminal smuggling organizations.

“Exploiting vulnerable individuals for profit is shameful,” he added.

White House press secretary Karine Jean-Pierre told reporters on June 28, “The fact of the matter is the border is closed, which is in part why you see people trying to make this dangerous journey using smuggling networks.”

Since Biden took office, the number of illegal crossings has hit multiple record highs. Border Patrol has apprehended more than 3.2 million illegal immigrants since January 2021, according to Customs and Border Protection data.

Four people have now been arrested in connection with the truck smuggling operation that resulted in the 53 deaths, according to the U.S. Department of Justice.

If convicted, both Zamorano and Martinez face up to life in prison or potentially the death penalty.

Two Mexican nationals, Juan Francisco D’Luna-Bilbao and Juan Claudio D’Luna-Mendez, were arrested on June 27. The men have each been charged with three firearm-related offenses after exiting a San Antonio property listed as the registered address of the truck used in the smuggling operation. Both had overstayed their B-2 visas.