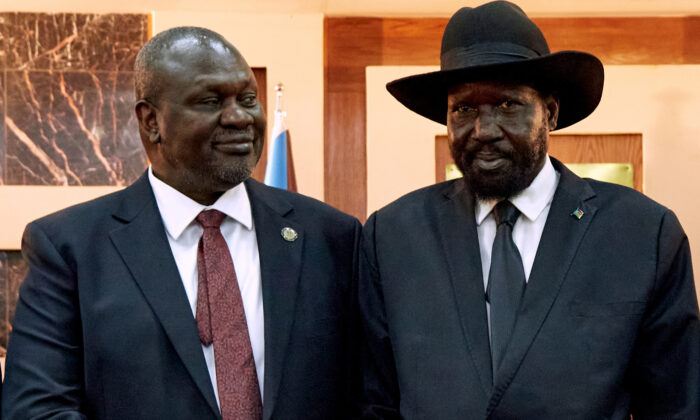 A Feb. 22 ceremony in South Sudan’s capital, Juba, brought two enemies face to face. That’s one reason the ceremony may prove to be a major political step toward ending the country’s terrible six-year-long internal war.

Terrible doesn’t adequately describe South Sudan’s war. The conflict, which still flickers, has killed an estimated 400,000 people, though no one knows precisely. Accurate body counts involving forensic analysis of mass graves require peace. However, 400,000 dead and over 3 million displaced are conscience-shocking numbers. They are big enough to demand attention.

Machar’s foremost enemy in the war, South Sudan President Salva Kiir, attended the ceremony. When Kiir spoke, he urged forgiveness and reconciliation.  This caught my attention: Kiir specifically asked members of the Dinka and Nuer tribes to forgive one another.

Kiir is Dinka; Machar is Nuer. The Dinka and Nuer are the two largest and most powerful ethnic groups in South Sudan.

Note I began this column calling the conflict an internal war. Most media have referred to the conflict as a civil war. I’ve used “civil war” myself, and it definitely has a political (civil) dimension, so I’m not quibbling over terms. However, ethnic animosity motivated the war’s bitterest combat, incited the worst atrocities and complicated diplomatic resolution. Often the ethnic (tribal) dimension superseded political issues.

In fact, the internal war began in December 2013 when a vicious gun battle erupted in Juba between Dinka and Nuer soldiers serving in South Sudan’s national army.

That firefight directly involved two fuels that ignite bloodshed everywhere on the planet but are the bane of sub-Saharan Africa: ethnic resentment and political rivalry.

The war spread and ultimately savaged all 10 South Sudanese states.

In April 2019, after mass protests against Bashir, Sudan’s military toppled him. A transitional government led by a civilian and military council replaced Bashir’s military regime. The goal is civilian rule in 39 months.

Kiir and Machar are both politicians whose personal interests have hindered peacemaking. Both men deserve blame for this. To be fair, they see themselves as responsible for protecting their own tribe’s interests. Smaller tribes in South Sudan (and there are many) say Nuer and Dinka domination is a problem a genuine national unity government must address. Corruption in Kiir’s government is documented.

Over the last three years, Kiir and Machar have had several face-to-face encounters. Perhaps the most relevant to reconciliation occurred in April 2019 in Rome. During a brief spiritual retreat at the Vatican, Pope Francis went to his knees and kissed their shoes, a gesture of humility and compassion.

“I am asking you as a brother to stay in peace,” the pope said. “I am asking you with my heart: Let us go forward. There will be many problems, but they will not overcome us. Resolve your problems.”

Time will tell if Kiir and Machar can cooperate, for there is much to reconcile and a lot to forgive.