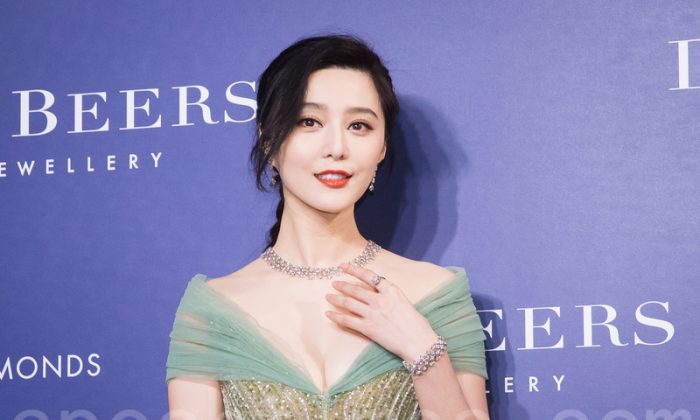 A state-run Chinese publication, Securities Daily, has confirmed on Sept. 6 that top actress Fan Bingbing, who disappeared from public view following accusations of tax evasion, has been placed “under control, and will accept the legal decision.”

Fan is suspected of using “yin-yang contracts” — referring to an arrangement in which an actor or actress receives more payment for a role than is officially acknowledge — to hide her income. Her disappearance in June led to widespread speculation about her whereabouts and condition under custody of the Chinese regime authorities.

Fan Bingbing, 36, has been listed by Forbes as the highest-paid Chinese celebrity every year since 2013. She rose to fame in East Asia in the late 1990s for her roles in hit productions such as “My Fair Princess,” a drama series in a Qing Dynasty-setting, and “Cell Phone,” the highest-grossing film of 2003. Fan has also appeared in a range of foreign films, including the French film “Stretch” (2011), Korean World War II film “My Way” (2011), and the 2014 Hollywood superhero blockbuster “X-Men: Days of Future Past.” Her status as a senior actress has given her frequent appearances on the red carpet, at movie premieres, fashion shows, and other high-profile events.

But now Fan’s career is at stake as the authorities levy charges of illicit business against her. According to the Securities Daily article, Fan’s “yin-yang contracts are only the tip of the iceberg. She is also suspected of participating in illegal lending and other forms of corruption. In the worst case, she faces legal punishment.”

In-production films and programs that Fan was involved in at the time of her disappearance have been stalled, and may not make it to audiences.

According to earlier reports, in May, former state-run Chinese Central Television (CCTV) anchor Cui Yongyuan claimed that Fan Bingbing had been paid 60 million yuan ($8.8 million) for four days of work. Cui also said that Fan had been signing “yin-yang” contracts and perpetrated tax evasion on a level that shocked Zhongnanhai, the seat of the Chinese leadership.

Following Fan’s disappearance, rumors and speculation circulated that she was under investigation or was living in house arrest under 24-hour surveillance. Per reports, Fan’s case has prompted the authorities to investigate the earnings of a further 200 film stars.