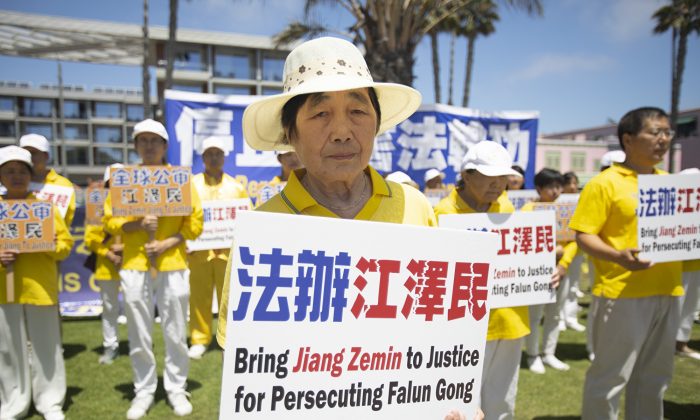 It’s been 20 years since the Chinese Communist Party (CCP) launched a massive persecution on July 20, 1999 against the spiritual meditation practice of Falun Gong, also known as Falun Dafa.

On the morning of July 21, Falun Gong practitioners in Southern California met near the beach in Santa Monica to practice the set of five gentle exercises. The peaceful, meditative music could be heard by both locals and visitors, including tourists from all over the world.

Afterward, the group held a rally to commemorate the 20th anniversary of the persecution, and members of the community and human rights leaders came to express their support for Falun Dafa practitioners’ spiritual freedom.

“Truthfulness, compassion, and tolerance are the core beliefs espoused by the Falun Gong,” said Hatfield. “We, as advocates for their human rights, need to tell the world the truth about what has been happening and continues to happen to the Falun Gong; we need to express our compassion for their plight; and we need to educate all peoples to be tolerant of those who may differ from us.”

Hatfield said that over the years, Falun Gong practitioners have been repeatedly subjected to detention and torture, including sleep deprivation, brainwashing, and harsh slave-labor conditions inflicted by the CCP. Countless others have also met death through the regime’s horrific practice of organ harvesting, in which the organs of healthy prisoners are harvested to be sold for profit.

“Thank you all for what you do to keep this abuse of human rights in the forefront,” she told members of the group at the rally.

Liu Yinquan, chairman of the Chinese Social Democratic Party and former professor of history at Weifang College in Shandong, China, shared his and his colleagues’ “deep respect” for practitioners of Falun Gong and their belief in truthfulness, compassion, and tolerance.

“Twenty years, a child is an adult, but the CCP’s persecution has not yet ended. This is a disaster for mankind and justice. People with conscience should come out against it,” he said.

Letters of support were also sent from community members who could not attend the event. Dr. Noah Arthur Bardach, co-founder of the non-profit organization Universal Human Rights Initiative; Dr. Soraya Fallah, human rights activist; Dr. Huu Dinh Vo, president of the United Council of Vietnamese Homeland and Overseas and assistant clinical professor at Touro University; and Ann Lau, chair of the Visual Artists Guild, all called for the CCP to stop persecuting Falun Gong and uphold the importance of human rights.

The founder of Falun Gong, Mr. Li Hongzhi, first spread the spiritual discipline to the Chinese people in 1992, and millions have benefited from the practice around the world. However, when former CCP leader Jiang Zemin was in power, he decided to begin the persecution against the group in the year 1999.

Survivors of the persecution at the rally called for the release of their family and friends in prison in China and for Jiang to be brought to justice.

Shi Zhenhua, a Falun Gong practitioner who has since moved to the United States, said she was detained for nine years. During her imprisonment, she was hung from a bed with her hands and feet shackled, and she was beaten and ridiculed. She was also not allowed to go to sleep or bathe, and she was restricted from using the toilet.

Li Yanchun, once the representative of a European car company in China, was arrested and tortured for 24 consecutive hours. He was forced to sit on a small stool and was kicked as soon as he moved.

He was then sent to the Wuyuan Labor Camp in Inner Mongolia. Every day, he endured hard labor, such as cleaning pig and duck manure, planting trees, and transporting heavy stones.

Li Shuying’s family had eight members who practiced Falun Gong. Li Shuying was arrested and sentenced to reeducation through labor, while her sister Li Shuqin was persecuted until her death at the end of 2018.