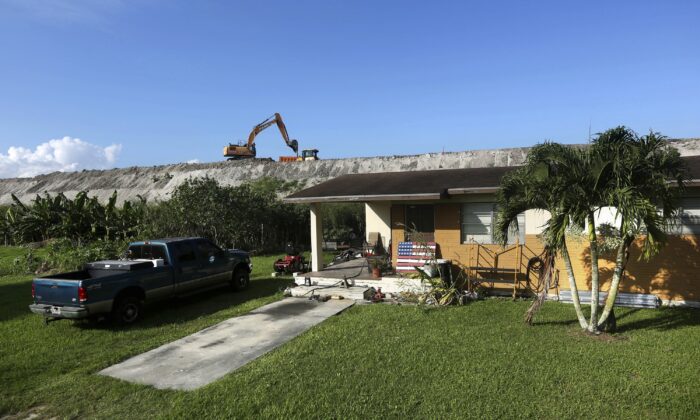 The Herbert Hoover Dike project overseen by the U.S. Army Corps of Engineers was completed three years ahead of schedule and at a savings of $300 million over the original cost estimate, officials said at a ribbon-cutting ceremony on the lake’s shore in Clewiston.

“Herbert Hoover Dike has never been in better shape than it is right now,” said Col. James Booth, commander of the Corps of Engineers’ Jacksonville district. “It’s great news for the lakeside communities.”

The restoration project, which began in 2005, involved work throughout the dike’s 143-mile span encircling the massive lake. The dike was originally started after hurricanes in the 1920s caused lake flooding that killed thousands of people in sugar-farming regions including Clewiston, South Bay, Pahokee, and Belle Glade. It was eventually enlarged to circle the lake’s entire 730 square miles.

A 1928 hurricane that triggered Lake Okeechobee flooding up to 20 feet deep in some towns is estimated to have killed at least 2,500 people—a majority of them Black farm workers. That storm and its impact on the poor was memorialized in Zora Neale Hurston’s classic 1937 book “Their Eyes Were Watching God.”

By the late 1990s, however, engineers discovered the natural sand, rock, and limestone dike that had been updated in the 1950s was weakening and could fail during a storm. That, in turn, led managers who control the lake’s levels to move more water to Florida’s east and west coasts to reduce the flood hazard.

Completion of the dike improvements will enable the lake’s levels to be kept higher, reducing the need for discharges that can carry harmful nutrients to the coasts and improving the quality of water moving south into the Everglades—the vast wetlands also in the midst of a multibillion-dollar restoration effort, said Everglades Foundation CEO Erik Eichenberg.

Everything about the dike project is massive. Over 7.8 million man-hours from 42 contractors went into the work. About 90,000 cubic yards of concrete was poured. Twenty-eight water control structures were replaced. There are nine pumping stations and nine navigation locks now in place.

For people living close to the lake, the project means less worry about a dike failure during a storm, said Clewiston Mayor James Pittman.

“It’s nothing short of a miracle. Now, the cities around the lake can dwell in confidence and safety,” he said.