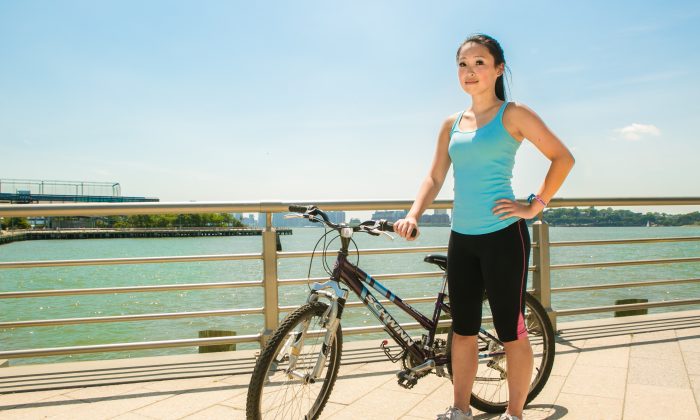 Kristine Feng, 15, at the Chelsea Pier in Manhattan on May 25, 2015. Feng is one of 30 teenagers from around the world embarking on a 3,000 mile bike trip starting on June 1 called "Ride 2 Freedom." (Benjamin Chasteen/Epoch Times)
China

After 15 Years, This Girl’s Dream to Go to China May Finally Come True. But Why She Wants to Go Will Shock You

One of Kristine Feng’s earliest memories was the lull of the disciplined rhythm of Tang Dynasty poetry. She’d sit in her bedroom in New Jersey, reciting Chinese poems with her paternal grandparents, and she remembered feeling eager.

It intrigued her that the words she repeated were once spoken by people in China thousands of years ago, by people wearing elaborate headdresses and billowing robes.

“I just think that is so cool,” she said. “That was my way of connecting to my history.”

She’s always felt a longing to go; perhaps physically setting foot in China might allow her to know her culture of origin viscerally. What does it feel like to hike across the Great Wall, where hundreds of thousands died for its construction?

Feng, a 15-year-old whose favorite school subject is history, often wonders about these types of questions.

But Feng has never been to China. She cannot go, not safely at least. She and her parents practice Falun Gong, a spiritual meditation discipline that is banned in China.

The practice’s teachings are based on the classical Buddhist and Taoist principles of truthfulness, compassion, and tolerance.

Despite obvious dangers, Feng wants to go to China for the first time this year.

Within seven years after Falun Gong was first taught to the public in 1992, roughly 100 million people in China had taken up the practice.

The Chinese Communist Party felt threatened by the sheer number—more people were practicing Falun Gong than were members of the Party—and by the fear the Chinese people preferred this spiritual practice’s traditional morality to the regime’s dogmatic atheism.

The Party banned Falun Gong in 1999. A propaganda barrage, arrests, torture, and deaths in the tens of thousands ensued.

Despite obvious dangers, Feng wants to go to China for the first time this year.

The motivation for this trip is more serious than her yearning to learn more about her culture. Feng is taking part in a project called Ride 2 Freedom.

She and roughly 30 teenagers and preteens from around the world will embark on a 3,000-mile bike trip starting on June 1.

They hail from Israel, Tanzania, Japan, Germany, Poland, India, Russia, Czech Republic, and Ukraine. There are a few like Feng who are from the United States too.

They will begin with a bike trek from Los Angeles to New York City to raise awareness about the Chinese regime’s efforts to eradicate Falun Gong, stopping to give talks at schools and meet with local politicians.

The participants of Ride 2 Freedom hope to gain the attention of the masses.

“There are many people out there who still have no idea what Falun Gong is,” said Keith Ware, the ride’s organizer. “That’s why we’re doing this ride.”

Ware noted how historically, oppressive regimes only loosened their reins when the public became aware.

“Nelson Mandela walked out of prison only when everybody knew his name and what was going on in South Africa,” Ware said.

The participants of Ride 2 Freedom hope to gain the attention of the masses during their ride through 19 U.S. cities.

They will ride from the Los Angeles city lights to the Mojave Desert, crossing the Great Plains and the Mississippi River, making the last two stops in Washington, D.C., and New York City.

For six weeks, they will camp outdoors, cook by the roadside, and bathe from streams and outdoor faucets. At their last stop in New York, they hope to meet with Ban Ki-moon to discuss China’s human rights violations.

The youths will complete the trip by taking turns between six teams. As one group rides, the other groups will rest in a coach bus following the bikers. Each team plans to ride two hours a day, or roughly 25 miles a day.

For some, the final destination is in China.

At the end of the ride, Feng could be among a group selected to go to China to rescue five orphans who have lost their parents during the persecution of Falun Gong.

According to a 2005 report from the United Nations Committee on the Rights of the Child, “children of families practicing their religion, notably the Falun Gong, are subject to harassment, threats, and other negative actions, including re-education through labor.”

Feng is hoping she can be one of the team members who go to China despite knowing the risks.

Over 3,800 deaths due to torture and abuse have been officially confirmed. Due to the difficulty of getting information out of China, the number is estimated to be much higher.

Researchers estimate that tens of thousands of practitioners have been killed by having their organs taken. The organs fetch high prices in China’s transplantation centers.

Their book, “Bloody Harvest,” shows that Falun Gong practitioners were the most likely source for approximately 41,500 transplants that were performed from the start of the Falun Gong persecution in 1999 to 2005. The regime claimed the organs were sourced from executed prisoners, but Kilgour and Matas showed there were not enough executions to provide the needed organs. Due to cultural prohibitions, China has no functioning organ donation system.

According to the researcher Ethan Gutmann, author of “The Slaughter,” forced organ harvesting from Falun Gong practitioners continued at least through 2013.

Four of the riders met at a Szechuan restaurant earlier this month in Chinatown, Manhattan.

Over peppery pork and stringed beans, they talked about the exciting parts of their upcoming trip—the camping and the photographs they will take.

But the big question was on their minds: Who will be the ones who go to China?

One member said he was scared. He did not want to go in case something were to happen.

Others, however, expressed a desire to go.

“I’d like to go,” said Annie Chen, 19, one of the project coordinators. “I’ve never been to China and it’s sad. All my Chinese friends have been back. I wish I could go back when there’s actual freedom to basic human rights. But going back now would be impactful.”

Most of my friends are scared for me. But I’m not because we’re doing such a great thing and it makes it worth it.
— Kristine Feng

Feng was not scared either. She thought of the protest in 2002, where 40 Western Falun Gong practitioners from around the world unfurled yellow banners in Tiananmen Square and shouted “Falun Gong is good.” All were captured by police, but were soon released.

“Most of my friends are scared for me. But I’m not because we’re doing such a great thing and it makes it worth it,” Feng said. “I’ve alway wanted to make a trip to China. It’s even more meaningful if I go for something that can make a difference in people’s lives.”