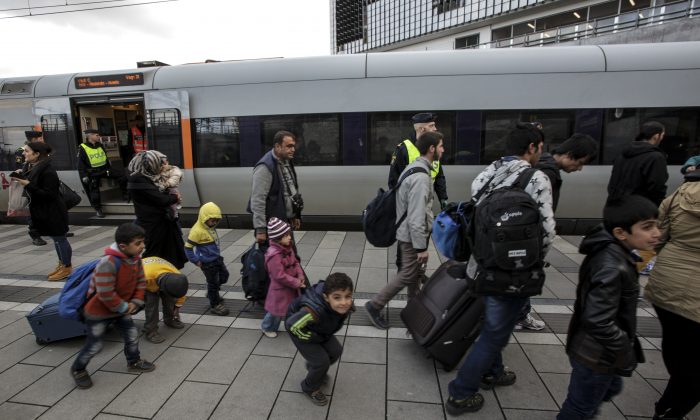 STOCKHOLM—Since it opened in 2000, the Oresund Bridge between Sweden and Denmark has been a towering symbol of European integration and hassle-free travel across borders that people didn’t even notice were there.

On Monday, Jan. 4, new travel restrictions imposed by Sweden to stem a record flow of migrants are transforming the bridge into a striking example of how national boundaries are re-emerging. A year of clampdowns on migration and terrorism has all but killed the idea of a borderless Europe where you could drive or train-hop from Spain in the south to Norway in the north without ever having to show your passport.

“We’re turning back the clock,” said Andreas Onnerfors, who lives in Lund, on the Swedish side of the bridge. An associate professor in intellectual history, he said he’s benefited from the free flow of people and ideas across the bridge—he’s studied on both sides and taught students from both Sweden and Denmark.

“We’re going back to a time when the bridge didn’t exist,” he said, referring to the ID checkpoints being set up Monday on the Danish side for train passengers wishing to cross over to Sweden.

The move is meant to stop undocumented migrants from reaching Sweden, which abruptly reversed its open-door policy after receiving more than 160,000 asylum-seekers last year, mainly from Syria, Iraq, and Afghanistan.

It follows the reintroduction of border checks in Germany, Austria, France, Belgium, and other countries in what’s supposed to be a passport-free travel zone spanning 26 nations.

The moves are supposedly temporary, but they are likely to be extended if Europe’s migrant crisis continues in 2016.

“It’s basically every country for itself now,” said Mark Rhinard, an expert on the European Union at the Swedish Institute of International Affairs.

Citing exceptional national circumstances related to security, terrorism, and public order, several European countries have suspended EU rules that required them to keep their borders open to each other.

It’s a significant development that strikes at the very heart of the EU project—the free movement of goods and people across borders.

The Bruegel think tank in Brussels says that in 2014 there were almost 1.7 million cross-border commuters in the passport-free zone known as the Schengen Area, after the Luxembourg town where it was created in 1985. Abolishing it would affect their daily lives, but the consequences for Europe would go deeper, given the “visible and powerful symbol of European integration that Schengen represents,” Bruegel researchers Nuria Boot and Guntram Wolff wrote in December.

Whether the temporary reintroduction of borders also means rebuilding mental boundaries between EU citizens remains to be seen. But the migrant crisis is becoming an even bigger challenge to European unity than the cracks emerging in recent years over the bloc’s common currency, the euro.

EU nations demonstrated starkly different views on how to deal with the 1 million migrants who crossed the Mediterranean in 2015. Germany and Sweden, until recently, said refugees were welcome, while Hungary built a fence to keep them out. The Danish government took a series of measures to discourage migrants from going there, including a proposal to seize their jewelry to cover their expenses in Denmark.

Common rules requiring refugees to seek shelter in the first EU country they enter collapsed, as Greece and Italy were overwhelmed by sea arrivals and countries farther north just waved the migrants through to their intended destination, often Germany or the Scandinavian countries.

Meanwhile the EU’s efforts to spread refugees more evenly across the bloc met stiff resistance from member states. By November, only about 150 of 160,000 refugees had been relocated from Greece and Italy under an EU plan.

The crisis underlines structural flaws in the EU, showing how it has implemented common rules that it just can’t enforce once the external pressures become too great, said Karl Lallerstedt, co-founder of Black Market Watch, a Switzerland-based nonprofit group focusing on cross-border smuggling.

“It’s not a strong federal state that can overrule its members,” he said. “At the same time individual states have obligations to the EU. So you’re in this sort of halfway house.”

Any hope of a quick return to a borderless Europe was crushed by the deadly Paris attacks in November, after which France declared a state of emergency and beefed up border controls with neighboring countries.

As soon as it starts to bite economically, people are going to start to ask: ‘Is this the right solution to the problem?’
— Mark Rhinard, researcher, Swedish Institute of International Affairs

However, if bottlenecks build up at the borders, EU citizens and companies moving goods in trucks will eventually get fed up, said Rhinard, of the Swedish Institute of International Affairs.

“As soon as it starts to bite economically, people are going to start to ask: ‘Is this the right solution to the problem?'” Rhinard said.

That question is already being asked by companies and commuters opposed to new ID checks at the 8-kilometer (5-mile) Oresund bridge and tunnel, known to European TV viewers as the focal point of the Swedish–Danish crime series “The Bridge.”

Train networks on either side have been integrated to allow thousands of commuters to cross the bridge daily, essentially incorporating the southern Swedish cities of Malmo and Lund into suburban Copenhagen.

But the new ID checks mean there will be no more direct railway service from Copenhagen’s main station to Sweden. Travelers heading to Malmo will have to switch trains at Copenhagen Airport after going through the checkpoints there, adding an estimated half an hour to the 40-minute commute.

To avoid the hassle, Sweden’s national railway company SJ canceled service to Denmark altogether, leaving only Danish and regional Swedish operators with service across the bridge.

“This is what happens when national states put down their foot down and say security is most important,” said Onnerfors. “It collides with the freedom (of movement) they’ve been talking about for 20 years, which was the reason we joined the EU to begin with.”