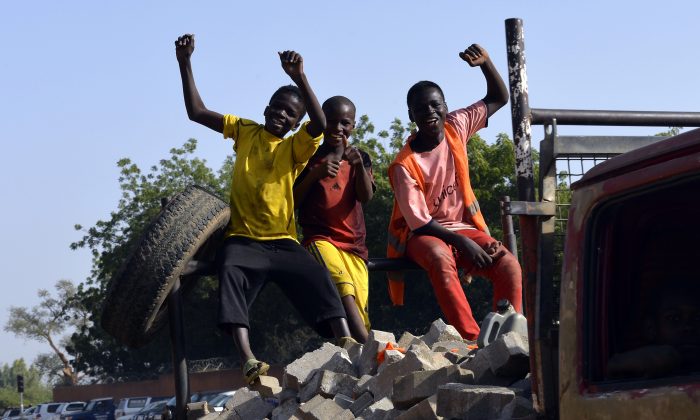 Children cheer while traveling on a truck loaded with stones in Niamey, Niger, on Nov. 23, 2014. (Miguel Medina/AFP/Getty Images)
Opinion

Afro-Optimism: Has the Pendulum Swung Too Far?

Rising Africa's leaders and citizens must keep focus on education, jobs, elimination of corruption, and inequality

Africa’s emergence as an economic force is no longer an expression of hope or just a matter of faith. So much has changed since March 2000 when The Economist declared Africa “a hopeless continent.” By December 2011, the same magazine proclaimed “Africa Rising,” with a real chance to follow in the footsteps of Asia.

Africa’s challenges are in public domain: Only one in four Africans has access to electricity. Africa is a net importer of food despite endless swathes of rich agricultural land. Millions of women and children die every year from preventable diseases. Wars, attempted coups, refugees, and disasters like floods and drought continue to stalk Africans. Unemployment continues to breed extremists that threaten the stability of many nations.

Still, hope is everywhere. Despite persistence of the old habits and troubles, change is taking place at a dizzying pace. Six of the world’s 10 fastest-growing countries today are African—and during most of the past decade, Africa has grown faster than East Asia, including Japan. Secondary-school enrollment in sub-Saharan Africa grew by 48 percent between 2000 and 2008.

Life expectancy across Africa has increased by about 10 percent, and child mortality rates have been falling in most countries. Over the past 10 years, real income per person has increased by more than 30 percent. Over the next decade, Africa’s GDP is expected to rise by an average of 6 percent a year—partly due to foreign direct investment, improved management of public resources, and political stability. FDI rose from $15 billion in 2002 to $46 billion in 2012.

Africa’s population is set to quadruple to about 4.2 billion this century—40 percent of all humans will be African—and 70 percent of Africans are under the age of 30. The population growth could contribute to a massive demographic dividend or undermine economic growth. It all depends on what we do today.

The continent undertakes reform to do business with the world: 66 percent of African countries enacted at least one reform last year compared to 33 percent in 2005, according to the World Bank’s 2014 Doing Business Report. Nine African countries—Benin, Burundi, Côte d’Ivoire, Ghana, Guinea-Bissau, Liberia, Rwanda, Sierra Leone, and Togo—are among the top 20 most improved in terms of business regulations since 2009. Nearly all are no more than a decade old out of civil wars and crushing dictatorships.

Africa today has three mobile phones for every four people. In Kenya, mobile-phone penetration stands at 80 percent for people over 15, the highest in Eastern Africa. This has spurred the world famous money-transfer service, the M-Pesa.

At least 12 African nations, Kenya included, are likely to become new high-level oil producers and exporters. It’s estimated more than 25 billion barrels of oil will become available for export over the next decade. Commercial-viable oil sources have been found in Senegal, Gambia, Sierra Leone, Liberia, Ghana, and São Tomé and Príncipe.

These developments have not happened in a vacuum, but are products of progress on the political front—a democracy dividend. Africa had 22 competitive elections in 2012 alone. Since Benin set the trend in 1991, Africans have changed governments through the ballot at least 30 times.

Africa’s countries must ensure that regular multiparty elections and economic progresses translate into good governments and respect for rule of law. Africa must also ensure freer societies, separation of powers, independence of the media and the judiciary, devolution of power and resources, restriction on presidential power, and respect for term limits.

Far-reaching economic reforms are also required to address the fact that as the economy has grown, so has poverty and inequality. We must build strong foundations for broad and inclusive growth.

Growth ought to be reflected in the human and physical development of our citizens; gainful employment, increased wages, job security, food security, better health and education for all. All children should have access to quality education, which in turn enables them to compete for high-paying jobs. Leaders must invest the proceeds of growth in social safety nets that protect the poor, the vulnerable and the middle class.

Africa must support the free-market economy, but this must not take away the sacred duty of government to ensure citizens have social security. Areas of the continent are wanting in infrastructure, especially power and roads.

The continent must do more to rein in nepotism, patronage, and corruption. Africa is losing $148 billion annually, an amount equivalent to 25 percent of its GDP, to corruption. Corruption increases the cost of goods in Africa by 20 percent as corrupt public officials receive up to $40 billion in bribes annually, equivalent to 20 to 40 percent of official development assistance.

Inequality must be tackled as a priority. Inequality and lack of opportunities for those at the bottom threatens the future of all and can bring down nations. Without attention to the issue of equity, growth will continue being mistaken for progress.

After a respectable period of tranquility, Africa has had setbacks. Full-scale wars have erupted in the Central African Republic, Mali, and South Sudan. Earlier, there was Tunisia and Egypt, the mothers of the Arab Spring.

While these conflicts are seen as governance challenges that can be addressed by sending in peacekeepers, the economic roots are deep with claims of exclusion from opportunities and development. High prices of food, income inequality, and massive youth unemployment amid a growing economy triggered revolutions in Egypt and Tunisia. Developments in these countries reinforce the connections among economic growth and mobility, equity, peace, and democracy.

Inequality is bad for democracy. Poor citizens, voiceless in the debates that shape elections, fear that democracy is on sale and leadership goes to the highest bidder. This threatens growth and stability.

Youth and the Future

The U.S.–Africa Summit, which unveiled $33 billion in new trade and investments and the Power Africa Initiative that seeks to provide electricity to 60 million homes and businesses, is an investment in African people. Likewise, U.S. President Barack Obama pledged to support young entrepreneurs through the Young African Leaders Initiative.

By firmly resisting the predicted resource curse, maintaining fiscal discipline and guarding against irresponsible borrowing for ego projects that add no value to the lives of citizens, Africa will be on the path to conquering the 21st century.

Africa’s future must be the responsibility of its leaders and its citizens.

Africa has changed and must continue changing. The change must be fast, broad, and deep enough to match the expectations of youth. Experiences of the past 20 years have shown what works and what does not. There is no reason to fail again.

Inclusivity is essential. We must decentralize and devolve power and resources equitably to all our citizens. Countries must spread the benefits of growth. Africa must wholeheartedly embrace democracy. Africa must particularly learn to hold free, fair, and transparent elections.

This article is based on the Annual Coca-Cola World Fund Lecture at Yale University, Oct. 9, 2014, delivered by Raila Odinga, former prime minister of Kenya. © 2014 The Whitney and Betty MacMillan Center for International and Area Studies at Yale.