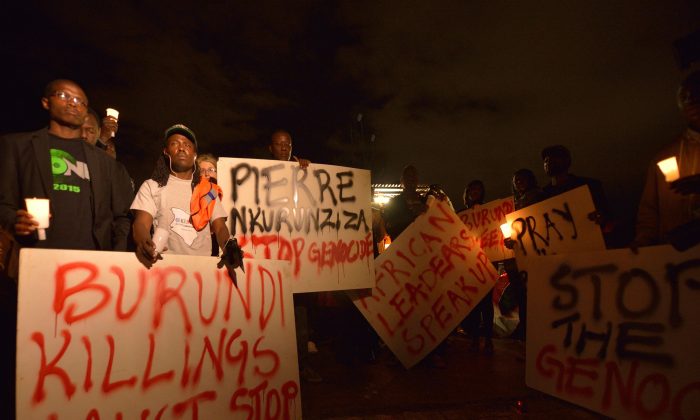 Kenyans and Burundians living in Kenya hold a vigil in Nairobi to call for an end to killings in Burundi on Dec. 13, 2015. (Tony Karumba/AFP/Getty Images)
Africa

Friday’s attack of three military facilities by an unidentified group that left at least 87 people dead, has led to an escalation of violence and human rights violations, a delegation of the African Commission on Human and Peoples’ Rights said in a statement.

Burundi has been in turmoil since President Pierre Nkurunziza sought re-election in April despite a two- term limit imposed by the constitution. The April announcement of Nkurunziza’s candidacy sparked street protests that boiled over into an attempted coup in May. Nkurunziza was re-elected in July, but the violence has since increased.

The AU urged in its statement that all state and non-state actors should put an immediate end to the ongoing violence and the human rights violations, saying that the current crisis cannot be solved through fighting.

Violations of human rights should be investigated and redressed, the statement said, adding that the government should give all humanitarian actors unfettered access for providing assistance to affected communities and deliver social services.

He said Museveni, who is mediating the crisis in Burundi on behalf of the East African Community, is talking with the Burundian government and the opposition to agree on the venue of the negotiations.

Many Burundians and the international community have opposed Nkurunziza’s third term as unconstitutional and in violation of a peace accord. The treaty ended a civil war in which 300,000 people were killed between 1993 and 2006.