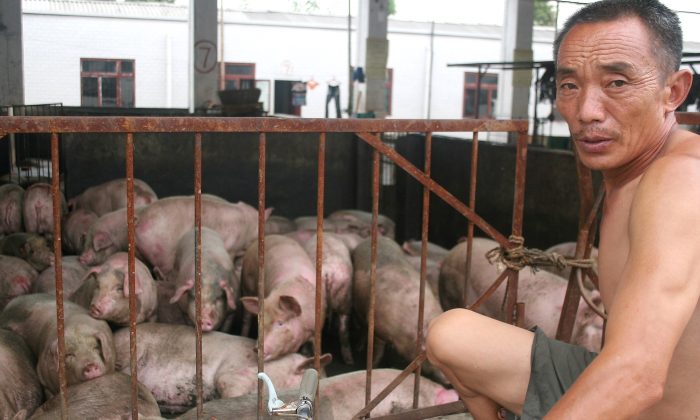 Beginning in northeastern China early this August, African swine fever has now expanded to the opposite end of the country as authorities confirmed an outbreak of the disease in the southwestern border province of Yunnan.

The Yunnan outbreak was reported by state media on Oct. 21. At two farms, of over 500 pigs found infected with the disease, all have died.

African swine fever (ASF) is a highly contagious disease affecting pigs and wild boars. There is no known cure or vaccine. The disease is so far not known to affect humans, even if infected pork is consumed.

ASF may have spread to China via Russia after Beijing imposed tariffs on pork from the United States in response to the Trump administration’s own tariffs on hundreds of billions of dollars’ worth of Chinese goods. The move has compelled many Chinese buyers to purchase Russian pork.

The Russian pork industry has been affected by ASF for the last decade, according to the  Pig Progress, a website run by the agricultural market research firm Proagrica Media. Russia has culled more than 2 million pigs since its initial domestic ASF outbreak in 2007.

Media reports on the first outbreaks of ASF in China were suppressed by regime censors, Radio Free Asia (RFA) reported on Oct. 17.

In August, scientists at the United Nations’ Food and Agriculture Organization had told scientific journal Science that the illness likely arrived in China via imported pork products, and that a genetic analysis indicated the ASF virus found in China is closely related to the strain circulating in Russia.

The National Center for Animal Health Epidemiology has recently confirmed, following DNA sequencing, that the ASF virus found in China was same strain as the one present in Russia, RFA reported.

Yunnan is the eleventh province in China officially confirmed to have been affected by ASF, the others being Inner Mongolia, Liaoning, Heilongjiang, Henan, Jiangsu, Anhui, Zhejiang, Jilin, Shanxi, and the provincial-level city of Tianjin City.

Chinese authorities have repeatedly tried to assure the public that the epidemic has been dealt with. However, different regions have continued to report ASK outbreaks.

A Chinese virologist surnamed Xu who participated in the efforts to control and prevent ASF told RFA in the same report that whether in terms of management or biotechnology, China lacks the means to stop the spread of the ASF epidemic.

The Chinese authorities have repeatedly published news stressing that infected pork in China is still edible because the virus can be killed after half an hour of cooking at high temperature.

Xu said that though there have not been any reports of human infection thus far, the virus could mutate and become transmissible to humans in a similar manner to bird flu.

Currently, only the national level Animal Health and Epidemiology Center is allowed to conduct ASF testing. Even provincial epidemic control laboratories are only permitted to send samples, she told RFA.

Ren Ruihong, a former senior executive at the Red Cross Society of China, told RFA that farmers may also be concealing the epidemic so as to keep making a living—another factor that is likely to contribute to the proliferation of the disease.