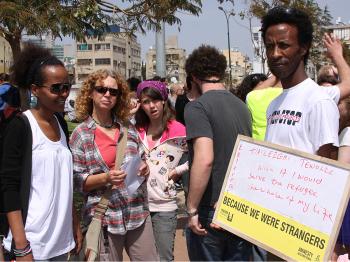 Foreigners in a Foreign Land—Refugees in Israel

By Ben Kaminsky
biggersmaller
Print
While Jews all over the world were celebrating their freedom and their journey from Egypt to the Promised Land a few thousand years ago, hundreds and thousands of African refugees were walking a similar path from their troubled homelands to Israel.

Israel for them is a promised land, the only land in the area in which they feel they can be saved. Hundreds of them who have already arrived in Tel Aviv have celebrated this Passover in a unique event.

Passover marks the exodus of the Jewish people from Egypt from slavery to freedom. According to the Jewish religion, Jews are commanded to tell the story as if it had happened to them personally and not as a mere historical event. Jews are commanded to treat strangers and the weak segment of society with compassion, because they were foreigners in a foreign land, Egypt, where they were slaves.

Human rights organizations and activists have decided to show sympathy and care to those who, similarl to the Jews, are journeying through Egypt into Israel to find shelter and security.

For years, thousands of asylum seekers originating in Sudan (including Darfur), Eritrea, Congo, and other troubled African countries are crossing the open border from Egypt to Israel in order to find new hope. Some of them have lost their families in genocidal acts in Darfur, some are persecuted for their beliefs, and some are politically persecuted by their governments.

It was reported that when trying to cross to Israel, some asylum seekers where shot dead by the Egyptian police, and others were beaten severely and arrested. Some asylum seekers were reportedly repatriated by Egypt despite the danger in their homelands.

In a special event that took place in a Tel Aviv park, human rights activists held a holiday feast for the African refugees, and used this opportunity to show their support and to raise awareness of the refugees' situation. The Israeli authorities seemingly fear a rising tide of asylum seekers getting into Israel, and therefore are making things hard on the refugees.

Yael Dayan, the head of the Tel Aviv City Council, is also in charge of the refugees issue in the municipality. She came to the event to show support. She says that the goal of the event is to “show the love we have also to people who are not Jewish and not Israeli, and it is kind of embracing the thoughts of freedom and liberty which this holiday represents.”

She told The Epoch Times that the Tel Aviv municipality is assisting refugees and asylum seekers by providing free education for the children, and in supporting organizations which support the refugees. In the past, the municipality also ran shelters for refugees who had no place to dwell.

One of the greatest difficulties refugees are dealing with is finding jobs. Dayan explains that refugees who get permits to work are allowed to work only in specific locations far from Tel Aviv, in which work is hard to find. She blames the state authorities for not assisting the refugees, who even make it hard on them in order to not encourage more asylum seekers to come.

Some Africans who came to the event showed The Epoch Times their U.N. protection papers, which state that they are not allowed to be deported; but these papers do not protect them from being arrested, and they are not helping them find work when they have no work permit. They told about their difficulties in caring for their needs.

A Sudanese asylum seeker who has been in Israel for four months after crossing the border told The Epoch Times: “I am being treated very well. I am very pleased, but the only thing is that I can’t find livelihood here, because they send us to work in all kinds of far places. I hope this problem will be solved.” He said that he came to the event mainly to eat, feel the atmosphere, and to watch an exhibition that was shown there about the lives of the refugees in Israel.

Many volunteers came to support, help, and participate in the celebration. Some of them are members of human rights organizations and youth movements. Many of the volunteers came from the Israel Activists movement, which is composed of Jewish youth who came to Israel for one year in order to learn about Israel and to volunteer, and also Jewish youth who have just immigrated to Israel.

Nat Kochan just finished his last year in high school in London, and came to Israel for one year as part of a program of his Jewish youth movement. As part of his volunteering, he has recently finished making a movie about the refugees in Israel called  Where is My Solomon.

“The purpose was to show the human side of the concept of a man in flight who is struggling for his life, and also to help to understand the details of their daily life in Israel,” he explains. “For me, it is about basic human rights. Without the respect for human rights, Zionism has the potential of being an evil ideology.”

David Davis immigrated to Israel from London in 2008. He is also a volunteer with Israel Activists and has decided to contribute his talent as events manager taking resopinsibility for making the event work. “I’m glad I could do it. I don’t have money, but what I have is time.”

“I think the refugee community in Israel is very appreciative of the help that they get,” he said. He also said that in Israel, contrary to their homelands, they are not subjected to danger and severe discrimination, although he believes Israel is not treating them as well as it should.

“Human rights are the most important. I think this is the obligation of Israel as a country, which is virtually composed of refugees, to stand for the rights of refugees and support them in the international community—both for these refugees and for the refugees in the entire world. That’s why they arrive in Israel—they feel that this is the safest country for them in the area.”