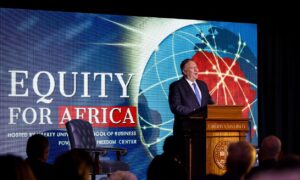 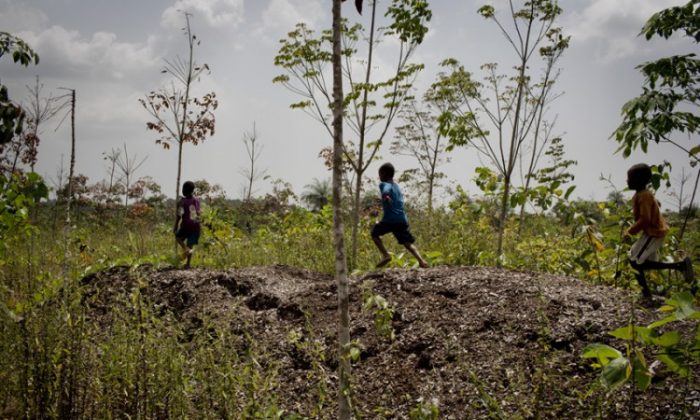 Children play on an abandoned pile of wood chips that was meant to be used as biomass for energy production in the West African country of Liberia. An investment made by Swedish energy company Vattenfall in 2010, and suddenly withdrawn in 2012, has left Liberian plantation owners and workers in a tough spot. (Anders Hansson/Swedwatch)
Africa

STOCKHOLM—The Swedish energy company Vattenfall invested in rubber tree plantations in the West African nation of Liberia as a source of biofuel—without understanding the sensitive nature of a post-conflict economy, according to a new report by watchdog organization, Swedwatch.

When Vattenfall withdrew suddenly without a detailed exit plan in May 2012, it left behind farmers unable to maintain plantations they had been promised the funds to maintain; it left behind environmental degradation; it left behind a post-conflict society grasping for some stability only to find its legs knocked out from under it again.

“The fact that they are working in a post-conflict country places great demands on the players,” said Maria Rydlund, tropical forest expert for the Swedish Society for Nature Conservation (SSNC), one of the organizations that contributed to the Swedwatch report. She said the company’s risk assessment should be reviewed.

“A proper phasing strategy should be developed already initially to minimize the risk that a situation like this will occur,” Rydlund said.

In 2010, Vattenfall and development financier Swedfund bought 30 percent of the shares of the biofuel company Buchanan Renewables Fuel (BRF). The partnership invested in rubber tree plantations that provided wood chips as biomass.

The biomass was to be used, along with coal, in Vattenfall’s coal plants to reduce carbon emissions. The biomass was also to provide energy for Liberia’s capital, Monrovia.

After two years, however, Vattenfall sustained a loss of about 1.3 billion Krona (US$200 million). Vattenfall, as the driver behind the investment, took the brunt of the loss by buying out Swedfund and absorbing BRF’s loss.

Vattenfall has admitted it was a bad deal and it did not understand the investment in Africa.

“We don’t understand Africa, we are a European company,” Ivo Banek, communication manager for Vattenfall, told the Swedish magazine Omvarlden. It was Vattenfall’s first time investing in Africa, and it underestimated the difficulties in building a functioning infrastructure, Banek said.

“There were local conditions that we could not influence,” he said.

Back on the plantations, farmers have tried to recover their losses.

It takes about seven years from the time a new rubber tree is planted to the time it produces a return. The farmers had been promised payment for all cut trees and support for the maintenance and replanting of others.

When the resources suddenly dried up, the farmers were left with plantations they could not maintain.

“Plantation farmers’ investments became worthless, because the contract was terminated, while payments failed to materialize or to meet promised levels,” said Henrik Frojmark, administrator for corporate responsibility at the Swedish Church, another of the organizations that supported Swedwatch’s report.

“They have simply no income from their plantations and must find other ways to support themselves,” Frojmark said. He explained that large piles of wood chips were left behind, which has attracted a type of ant that is killing local livestock.

Liberia has had a hard time recovering as a whole from two civil wars, the first from 1989 to 1996, and the second from 1999 to 2003. The wars displaced hundreds of thousands and left the economy in shambles.

Swedwatch is a nonprofit organization that works to ensure Swedish companies operate without negative social or environmental impact in developing nations.

Frojmark says Vattenfall’s example shows how important it is for companies to make accurate risk assessments and impact assessments before investing in poor, post-conflict countries.

“We want our reports to form the basis for constructive dialogue with companies and decision makers and ultimately lead to positive changes in the companies’ future behavior,” Frojmark said.

Rydlund said, “Investments that affect vulnerable groups’ living conditions and the environment must be preceded by meticulous research based on good local knowledge as well as on the current context in the country.”