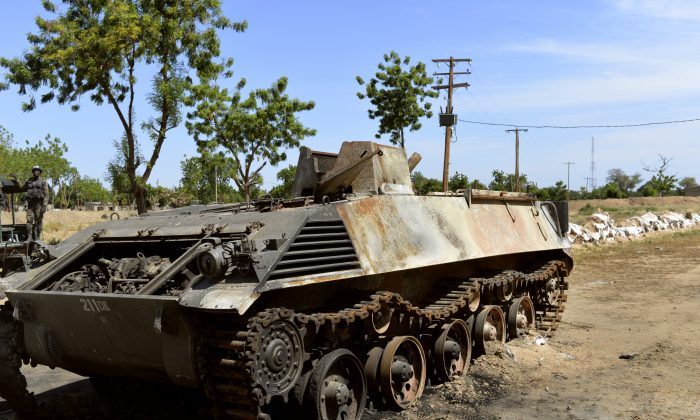 This picture taken on November 12, 2014 in front of the military base of Amchide, northern Cameroon, 1 km from Nigeria, shows a Boko Haram tank destroyed by Cameroonian soldiers during an attack against the military base by the Islamic fighters on October 15, 2014. (Reinnier Kaze/AFP/Getty Images)
Africa

As several African countries plan to send troops to battle the increasingly violent and expanding Islamic extremist group Boko Haram, press freedom advocates are also urging for open elections that can be covered by the world’s media.

On Friday, Boko Haram attacked a town inside of the neighboring country of Niger. It was the second foreign country they attacked in one week.

The militant group, known for kidnapping groups of young women and girls and brutal murders, are seen as a growing threat to the West Africa and Central Africa region.

Regional instability in the country’s northeast, where Boko Haram has taken over territory, has led international observers to urge for free and fair elections.

Part of the concerns over elections are related to media access. The Committee to Protect Journalists said it is particularly concerned that only a small number of foreign media have been able to get proper visa approvals and accreditation for foreign journalists.

“While the presence of journalists is no guarantee of free and fair elections, journalists are critical to the free flow of information,” said Sue Valentine, Africa Program Coordinator for CPJ in an email. “Nigerians and those interested in events in Nigeria can only know what is happening if journalists are able to report freely what they see, and what citizens and officials are saying and doing.”

Valentine added that CPJ has no direct evidence that the journalists are systematically being denied access, and that likely an inefficient bureaucracy is to blame. Either way, Valentine said that it won’t be beneficial to free and fair elections to have fewer reporters on the ground in country.

“The end result is the same—global and regional news organizations are being denied access to a close presidential race in Africa’s largest democracy and biggest economy,” she said. “No news is not good news.”

Boko Haram has been blamed for killing 10,000 people over the past year. The African Union has authorized a 7,500-strong force to fight the group with logistical support from the U.N. Nigeria will likely be joined by neighboring countries of Chad, Niger, Benin, and Cameroon in the fight.