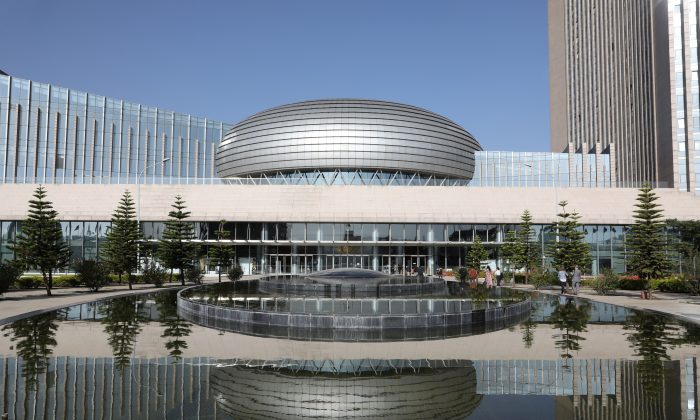 The headquarters of the African Union (AU) in Addis Ababa, Ethiopia, in a file photo. (Ludovic Marin/AFP/Getty Images)
Africa

In the Ethiopian capital, Addis Ababa, just like in many major cities in Africa, there are various Chinese investment projects at different stages of implementation. High-rise buildings under construction by the Chinese can be seen in most parts of the city.

The Africa Union Conference Center and Office Complex (AUCC), funded and constructed by the Chinese government at a cost of $200 million, stands imposingly in Addis Ababa, dwarfing nearby slums and other commercial buildings.

At 99.9 meters (328 feet) tall, the main building is currently the tallest building in Addis Ababa and houses the headquarters of the Africa Union, a continental body consisting of 55 member states.

Though the AUCC was a gift from China, members of civil society organizations (CSOs) in Africa, who gathered in the Ethiopian capital for a pre-Climate Change and Development in Africa (CCDA-V111) side event on Aug. 27, expressed concern about what they say is China’s continued plunder of the continent’s resources with little concern for local people.

The side event was organized by the Pan African Climate Justice Alliance (PACJA), a coalition of CSOs in Africa, and the discussions centered on the growing Chinese investments in the continent.

During the meeting, members of CSOs from different parts of Africa expressed displeasure over the Chinese investments, which they say weren’t benefiting local communities.

“I’m sure you have seen that there is a lot of construction going on here in Addis Ababa, and most of the construction is being done by the Chinese. As civil society [organizations], we should find ways of engaging them [the Chinese] and our governments so that the investments can benefit local people,” Mithika Mwenda, the executive director of PACJA, told participants at the event.

The CSOs wished that the Chinese investments wouldn’t harm Africa’s environment, but would instead take care of the well-being of the communities they are investing in.

Henry Bayoh, an environmentalist and development expert based in Sierra Leone, told The Epoch Times that despite massive investments by Beijing in Africa, many people in his country weren’t benefiting from the investments.

“Many people in my country are not happy with the Chinese as they [the Chinese] are taking over virtually all sectors of the economy and business opportunities in the country. But these Chinese are not employing many local people, as they are bringing their own labor from China,” Bayoh said.

Though the CSOs agreed that Africa had abundant resources, they acknowledged that the continent doesn’t have the finances, infrastructure, or ability to harness the natural resources for development, hence the involvement of China.

“There is a lot of money coming in [from China] and increasing debt, as we keep on accessing loans,” the CSOs stated in a communiqué after the meeting.

However, there are no checks and balances and a lack of good governance, which has resulted in a lack of benefits for the continent from the Chinese loans.

The Chinese investors are maximizing their profits and are bringing in their own companies to Africa, the CSOs stated.

Investment in the Future

In the statement, the CSOs said there was over-exploitation of natural resources in Africa by China without taking care of future generations.

“[The] Chinese have an agenda do we have one as Africans? Do the African states understand the livelihood frameworks when negotiating for the contracts? In several instances the Chinese come into our countries illegally and choose [to] over-exploit or extend their mandate by engaging in activities they are not licensed to do,” the statement reads.

The South African newspaper reported in 2018 that “according to economic analysts, China’s never-ending loans could lead Africa down a slippery slope of unpayable debt.”

In the last 18 years, the reported stated, China had “pumped more than $124 billion into Africa, while the International Monetary Fund has warned of increasing debt distress in 15 African countries.”

Against this background, the CSOs stated there is a need for proper consultations between CSOs, the private sector, and government before engaging in negotiations with the Chinese.

The CSOs stated that there should be increased transparency, and investors should respect human rights and ensure decisions will positively influence future generations.