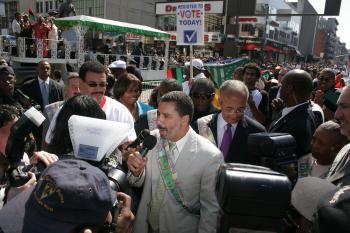 The Gov: Governor David Paterson stops to address the crowd at the African American Day Parade in Harlem on Sunday. (Tim McDevitt/ Epoch Times)
US

NEW YORK—It was a bright warm day in Harlem on Sunday for the 39th annual African American Day Parade.  Politicians, marching bands and dance troupes marched, smiled, and waved to a crowd of hundreds of thousands of spectators along the parade route on Adam Clayton Powell Jr. Blvd.

Mr. Powell’s father, former US Congressman Adam Clayton Powell Jr., is the namesake for the Harlem Avenue, and was the Grand Marshal for the first African American Day Parade in 1969.

Gov. Paterson and the other Grand Marshals stopped at the parade midpoint just north of 125th St. to speak to an enthusiastic crowd. The theme of the day was US Presidential candidate Barack Obama, and the changing face of US politics.

“Who would have ever dreamed when we started the African American Day Parade 39 years ago that in 2008 an African American would be leading in the polls to become the next President of The United States…that’s the American Dream as we’ve never heard it before” Gov. Paterson also acknowledged civil rights leaders and “those who have fought together to make the constitution of this country mean something”

“This is a unique time in this country’s history, this is a time when so many of us believe that the promise this country has made over a period of decades will come true this year, it is important that all of us come out and vote, let us control our destiny and vote”

State Senator Malcolm Smith, touted by other speakers to become the next majority leader of the New York State Senate, followed suit:

“This is a great time for this country, this an opportunity for our children to see all of the efforts that we taken forth… this is our time, this our year, we all have to come out and vote!”

Behind the politicians was a long line of organizations marching in the parade, including 100 Black Men in Law Enforcement Who Care, Rev. Al Sharpton’s National Action Network, the NAACP, a group representing Sean Bell, veterans, high school marching bands, and Ronald McDonald.